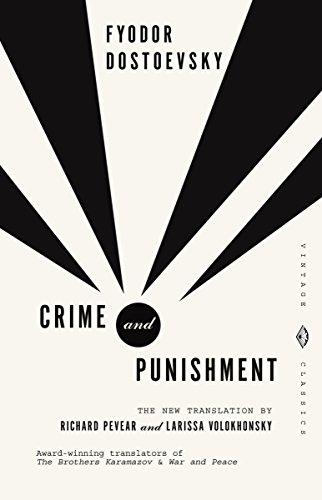 Crime and Punishment (1866) is the story of a murder committed on principle, of a killer who wishes by his action to set himself outside and above society. A novel of great physical and psychological tension, pervaded by Dostoevsky's sinister evocation of St Petersburg, it also has moments of wild humour. Dostoevsky's own harrowing experiences mark the novel. He had himself undergone interrogation and trial, and was condemned to death, a sentence commuted at the last moment to penal servitude. In prison he was particularly impressed by one hardened murderer who seemed to have attained a spiritual equilibrium beyond good and evil: yet witnessing the misery of other convicts also engendered in Dostoevsky a belief in the Christian idea of salvation through suffering.

"This fresh, new translation...provides a more exact, idiomatic, and contemporary rendition of the novel that brings Fyodor Dostoevsky's tale achingly alive...It succeeds beautifully." -San Francisco Chronicle "Reaches as close to Dostoevsky's Russian as is possible in English...The original's force and frightening immediacy is captured...The Pevear and Volokhonsky translation will become the standard English version."-Chicago Tribune About the Author:

Fyodor Mikailovich Dostoevsky's life was as dark and dramatic as the great novels he wrote. He was born in Moscow in 1821. A short first novel, Poor Folk (1846) brought him instant success, but his writing career was cut short by his arrest for alleged subversion against Tsar Nicholas I in 1849. In prison he was given the "silent treatment" for eight months (guards even wore velvet soled boots) before he was led in front a firing squad. Dressed in a death shroud, he faced an open grave and awaited execution, when suddenly, an order arrived commuting his sentence. He then spent four years at hard labor in a Siberian prison, where he began to suffer from epilepsy, and he returned to St. Petersburg only a full ten years after he had left in chains.

His prison experiences coupled with his conversion to a profoundly religious philosophy formed the basis for his great novels. But it was his fortuitous marriage to Anna Snitkina, following a period of utter destitution brought about by his compulsive gambling, that gave Dostoevsky the emotional stability to complete Crime and Punishment (1866), The Idiot (1868-69), The Possessed (1871-72), and The Brothers Karamazov (1879-80). When Dostoevsky died in 1881, he left a legacy of masterworks that influenced the great thinkers and writers of the Western world and immortalized him as a giant among writers of world literature.

1. Crime and Punishment (Paperback or Softback)