Items related to Political Emotions: Why Love Matters for Justice 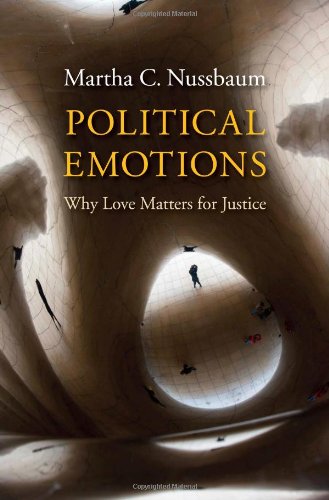 How can we achieve and sustain a "decent" liberal society, one that aspires to justice and equal opportunity for all and inspires individuals to sacrifice for the common good? In this book, a continuation of her explorations of emotions and the nature of social justice, Martha Nussbaum makes the case for love. Amid the fears, resentments, and competitive concerns that are endemic even to good societies, public emotions rooted in love--in intense attachments to things outside our control--can foster commitment to shared goals and keep at bay the forces of disgust and envy. Great democratic leaders, including Abraham Lincoln, Mohandas Gandhi, and Martin Luther King Jr., have understood the importance of cultivating emotions. But people attached to liberalism sometimes assume that a theory of public sentiments would run afoul of commitments to freedom and autonomy. Calling into question this perspective, Nussbaum investigates historical proposals for a public "civil religion" or "religion of humanity" by Jean-Jacques Rousseau, Auguste Comte, John Stuart Mill, and Rabindranath Tagore. She offers an account of how a decent society can use resources inherent in human psychology, while limiting the damage done by the darker side of our personalities. And finally she explores the cultivation of emotions that support justice in examples drawn from literature, song, political rhetoric, festivals, memorials, and even the design of public parks. "Love is what gives respect for humanity its life," Nussbaum writes, "making it more than a shell." "Political Emotions" is a challenging and ambitious contribution to political philosophy.

"There's no more interesting or persuasive writer on the wider and connected subjects of emotions and social justice than Martha Nussbaum...Here, she draws on aesthetics as well as philosophy to make her point. The fundamental message of the book is that without love political justice is empty of content...It's a great book...and goes straight on the shelf beside John Rawls. Political morality for the new age". --Brian Morton, Glasgow Herald

"Political Emotions is an important work, and Nussbaum has created valuable space for love and human imperfection to be weighed more heavily in the search for justice" --Geraldine Van Bueren QC, Times Higher Education, 7 November 2013

Political Emotions is an important contribution to an already impressive body of work. Nussbaum has transformed modern philosophy, helping to re-connect it to the emotions, to psychology, to the arts, and to public policy. --Jules Evans, LSE Review of Books, 11 December 2013

"In Political Emotions, she argues more specifically for the importance of love in politics. She is well aware that many liberal-minded intellectuals are wary about bringing too much emotion into the public square but she argues persuasively that 'ceding the terrain of emotion-shaping to anti-liberal forces gives them a huge advantage in the people's hearts and risks making people think of liberal values as tepid and boring'. [...] Nussbaum makes the general point eloquently and persuasively [...]" --Julian Baggini, Financial Times, 6 January 2014

"Continuing her philosophy inquiry into both emotions and social justice, Nussbaum now makes the case for love, arguing that emotions rooted in love can foster commitment to shared goals and keep fear, envy and disgust at bay." --Marina Gerner, Times Literary Supplement, 28 February 2014

Martha C. Nussbaum is Ernst Freund Distinguished Service Professor of Law and Ethics at the University of Chicago.