Items related to Making Americans: Jews and the Broadway Musical

Most, Andrea Making Americans: Jews and the Broadway Musical 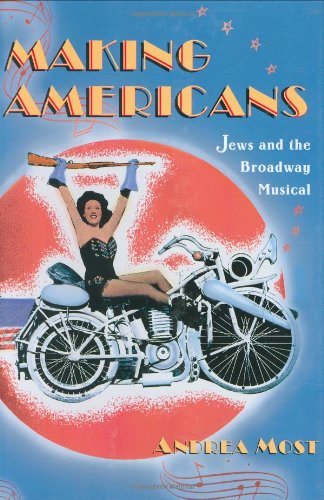 From 1925 to 1951 - three chaotic decades of depression, war and social upheaval - Jewish writers brought to the musical stage a powerfully appealing vision of America fashioned through song and dance. It was an optimistic, meritocratic, selectively inclusive America in which Jews could at once lose and find themselves - assimilation enacted onstage and off, as Andrea Most shows. This book examines two interwoven narratives crucial to an understanding of 20th-century American culture: the stories of Jewish acculturation and of the development of the American musical. Here we delve into the work of the most influential artists of the genre during the years surrounding World War II - Irving Berlin, Eddie Cantor, Dorothy and Herbert Fields, George and Ira Gershwin, Oscar Hammerstein, Lorenz Hart and Richard Rodgers - and encounter interpretations of classics such as "The Jazz Singer", "Whoopee", "Girl Crazy", "Babes in Arms", "Oklahoma!", "Annie Get Your Gun", "South Pacific" and "The King and I". Most's analysis reveals how these brilliant composers, librettists and performers transformed the experience of New York Jews into the grand, even sacred acts of being American. Read in the context of memoirs, correspondence, production designs, photographs and newspaper clippings, the Broadway musical clearly emerges as a form by which Jewish artists negotiated their entrance into secular American society. In this book we see how the communities these musicals invented and the anthems they popularized constructed a vision of America that fostered self-understanding as the nation became a global power.

Jews and the Broadway Musical

For lovers of musical comedy as well as those interested in Jewish contributions to the cultural life of America, this well-researched effort is an invaluable read. Publishers Weekly 20031020 One of the major strengths of the book is that Most is an excellent social historian. Between her analyses of musicals, she deftly and economically chronicles an American living and changing from the Roaring Twenties to the Depression, World War II, and social upheavals of the post-war years. -- Tom Tugend Jerusalem Post 20040711 Andrea Most, in her perceptive new book Making Americans, answers the question of how Jewish immigrants and their sons created the iconic myths of an America they never intimately knew...Most examines the images and songs in such classics as Oklahoma!, Annie Get Your Gun, Babes in Arms and South Pacific to show how Jewish immigrants imagined America on the musical stage. Demonstrating how musicals shaped and were shaped by the shifting status of immigrants assimilating into a new culture, Most makes a case that the American musical was really a means by which the authors attempted to forge a new, accepting community...This book enlarges the perspective of anyone interested in the history of the American musical. -- Wendy Wasserstein American Theatre 20040701 Most makes original and coherent arguments...She's a shrewd and thoughtful writer with a cultural reach that easily bridges the distance from George Eliot's Daniel Deronda to Ralph Ellison's Invisible Man. Her not-to-be-missed footnotes are more engaging than the main texts of many academic writers on popular culture. She carefully braids together two interdependent events, the absorption of Jews into America and the rise of the musical as a celebration of democracy. Jews, while defining themselves in the new world, helped America define itself as an egalitarian democracy--precisely the kind of place Jews wanted to live. -- Robert Fulford National Post 20040803 Andrea Most has produced a fascinating book which uncovers how Jewish artists established a new sense of what it means to be Jewish in America...Making Americans looks at the period 1925 to 1951, concentrating on the stories of Jewish acculturation and the development of the American musical. Jewish Telegraph 20041015 As Andrea Most, points out in her lively history of the Jewish contribution to musicals, Making Americans: Jews and the Broadway, Richard Rodgers and Oscar Hammerstein drew on the themes of Jewish exile to depict the evolution of American culture in Oklahoma! According to Most, the message they conveyed was: 'Cowboys must settle down and become farmers; the frontier must be 'tamed' into a useful agricultural resource; young people must marry and bring up new Americans.' Together with others like Irving Berlin and George and Ira Gershwin, Rodgers and Hammerstein transformed the American musical from dancing chorus lines to something resembling European opera. -- Alan Wolfe Chronicle of Higher Education 20050603