Items related to Ideals and Ideologies: A Reader

Ideals and Ideologies: A Reader 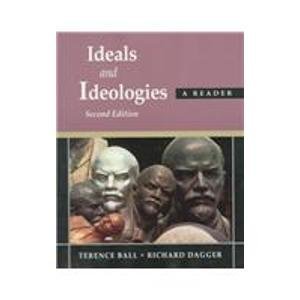 As a complement to the author's text "Political Ideologies and the Democratic Ideal" or for use independently, this anthology contains key selections from a wide array of original sources. "Ideals and Ideologies" spans the spectrum of the major "isms" that have had a profound effect on politics in our time. Retaining the essays from the previous editions, Terence Ball and Richard Dagger have added several new essays including "Malcolm X Speaks", and Thomas Spragen's "The Limitations of Libertarianism", to reflect current political trends. The authors have also edited the selections to make them more reader-friendly, and have added footnotes to clarify allusions and translate foreign phrases.