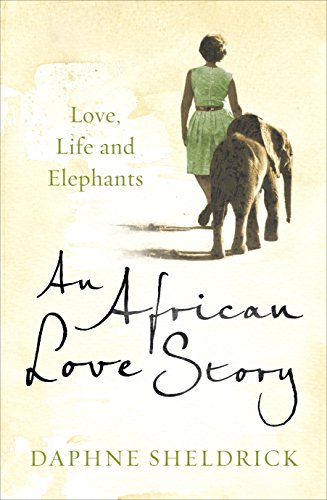 A typical day for Daphne involves rescuing baby elephants from poachers; finding homes for orphan elephants, all the while campaigning the ever-present threat of poaching for the ivory trade.

An African Love Story is the incredible memoir of her life. It tells two stories. The first is the Tsavo years, and the extraordinary love story which blossomed when the young Daphne, moved to Tsavo with her first husband and fell head over heels with both the park and its famous warden, David Sheldrick. The second is the love story of how Daphne and David, who devoted their lives to saving elephant orphans, at first losing every infant under the age of two until Daphne at last managed to devise the first-ever milk formula which would keep them alive.

Africa has never been more vividly described...I read it straight through and it nearly broke my heart...her warnings about the decline of wildlife should be heeded the world over (Joanna Lumley)

Compulsively readable...the more you hear about elephants from her, the more you wonder why they don't rule the world (Kathryn Hughes Mail on Sunday)

Absorbing, moving...paints a vivid picture of an extraordinary life in the bush that will delight everyone (BBC Wildlife Magazine)

Daphne Sheldrick has spent her entire life in Kenya. For over 25 years, she and her husband, David, the famous founder of the the giant Tsavo National Park, raised and rehabilitated back into the wild orphans of misfortune from many different wild species. These included elephants, rhinos, buffaloes, zebra, eland, kudu, impala, warthogs and many other smaller animals. She has two daughters, both of whom have spent their lives helping her. In 2002 she received the BBC Lifetime Achievement Award. In 2006 she was made Dame Commander of the British Empire by the Queen, the first Knighthood to be awarded in Kenya since the country received Independence in 1963.