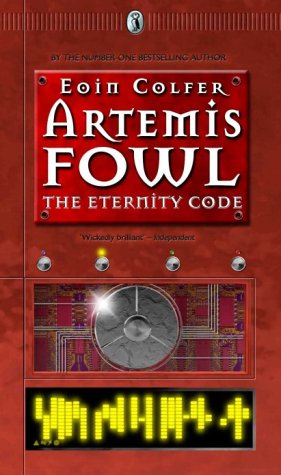 Artemis requires the help of the fairy folk once more as he is tricked into handing over the C Cube super computer he has constructed from stolen fairy technology, to Chicago businessman, Jon Spiro. This time Butler's life is at stake so Artemis, Butler's sister Juliet and Holly Short travel to Chicago to steal back the Cube and ensure that Spiro is put out of business - permanently!

The third instalment of high-tech, criminal whizz-kid adventures set in the fairy-magic-filled world of Master Artemis Fowl may be reassuringly familiar but it is also bulging with author Eoin Colfer's trademark wit and thrilling seat-of-the-dwarf-pants adventure. Following on from Artemis's opening encounter with the fairy underworld in Artemis Fowl and its thumping sequel Artemis Fowl: The Arctic Encounter, The Eternity Code takes the books' eponymous young anti-hero, who with each successive adventure turns out to be a little less bad after all, on his most dangerous mission yet.

Artemis and his bodyguard Butler have set up a meeting in Chicago with dangerous international businessman Jon Spiro. In his latest eager attempt to make money, using a priceless futuristic cube of purloined Fairy gadgetry that can do just about anything, Artemis has underestimated Spiro and arrived at the rendezvous under-prepared. Big mistake. It is an ambush, and though Artemis escapes with his life, Butler is mortally wounded.

The cube may be lost but Artemis refuses to accept his friend's demise and quickly deep freezes Butler in the restaurant kitchen. He calls on the only people he knows who might be able to get him back--Holly Short of the subterranean Fairy police and her race's super-advanced technology. Holly and Artemis must find a way to bring Butler back from the dead and retrieve the lost Eternity Cube that could change the balance of power between humans and fairies forever. It is a Herculean task and the price exacted upon Artemis for such assistance is very high indeed.

What Colfer's latest plot may lack in depth or sophistication is more than made up for by the sheer verve and energy of his settings, characters and action. These books are very entertaining indeed and hugely readable, and once you're a Fowl fan you'll be hooked until Artemis decides to go straight. Recommended for ages nine and above. --John McLay

'Funny and Inventive' -- Time Out

'The jokes and thrills are wickedly brilliant' -- INDEPENDENT