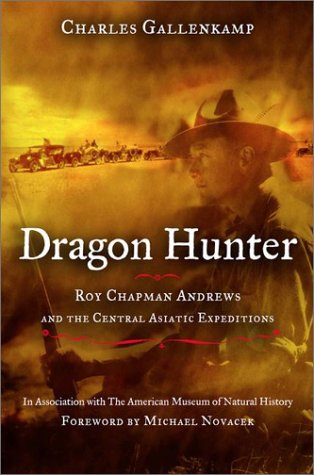 Roy Chapman Andrews led "the most celebrated fossil-hunting expedition of the twentieth century", wrote New York Times science writer John Noble Wilford. Financed by Morgan, Rockefeller, and a host of other Wall Street titans, the Central Asiatic Expeditions (1922-1930) comprised the most ambitious scientific venture ever launched from the United States up to that time. Under the auspices of New York's American Museum of Natural History, Andrews conducted five expeditions to the last unchartered corner of the world: the Gobi Desert of Outer and Inner Mongolia. In Dragon Hunter, Charles Gallenkamp vividly recounts these tremendous discoveries and the unforgettable adventures that attended them. Filled with astonishing tales of Andrews and his team braving raging sandstorms and murderous bandits, enduring political intrigue and civil wars, and reveling in the fascinating world of Peking's foreign colony, Dragon Hunter also traces the religious controversy over evolution and the anti-imperialist conflicts between the United States and China that were sparked by Andrews's expeditions. Gallenkamp tells Andrews's incredible life story, from his beginnings as a floor sweeper at the American Museum of Natural History to his international fame as one of the century's most acclaimed explorers. The result is a thrilling page-turner-an epic search for dinosaurs and extinct mammals cloaked in a sweeping historical narrative.

Describes how a fossil-hunting team led by Roy Chapman Andrews during the Central Asiatic Expeditions of 1922-1930 braved sandstorms, bandits, civil war, and political conflict as it searched for evidence of dinosaurs in the Gobi Desert.

Charles Gallenkamp is the author of Maya: The Riddle and Rediscovery of a Lost Civilization.