Items related to Life is Real Only then, when 'I Am': All And... 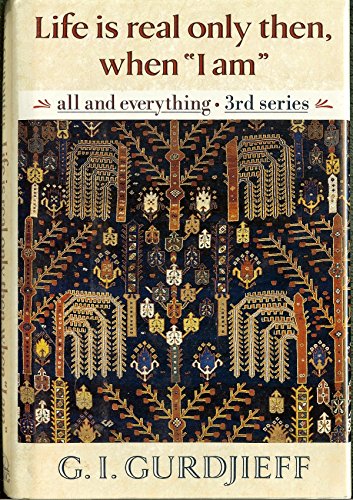 The incomplete fragments that make up Gurdjieff's third series draw chiefly on material from his own life. He was born of Greek and Armenian parentage at Alexandropol, near the frontier of Russia and Turkey, supposedly in 1877. The Russo-Turkish war was in progress, and, while he was still an infant, his family moved to Kars, which had fallen into Russian hands. From the beginning Gurdjieff was distinguised from other boys at school by his insatiable questioning. He sought guidance from his elders among the many different sects of this region, read voraciously and at an early age left home in search of wise men or brotherhoods that might possess keys to the knowledge that had become a necessity for his life. That he received instruction from spiritual masters in the east there can be no doubt. It comprises autobiographical fragments, a series of talks and an unfinished essay on "The Outer and Inner World of Man".

Gurdjieff was born in Alexandropol, and trained in Kars both as a priest and a physician. For some twenty years, he travelled in the remotest regions of Central Asia and the Middle East - this time was crucial in the moulding of his thought. With his party of followers, he was responsible for the opening of the Institute for the Harmonious Development of Man.

Other key works available from Arkana: BEELZEBUB'S TALES TO HIS GRANDSON, VIEWS FROM THE REAL WORLD and MEETINGS WITH REMARKABLE MEN.

Life Is Real Only Then, When I Am: All And Everything Third Series (All and Everything, 3rd Series)

Life Is Real Only Then, When I Am (All and Everything, 3rd Series) Gurdjieff, G. I.

Life Is Real Only Then, When I Am: All And Everything Third Series (All and Everything, 3rd Series)