Items related to How It All Began

Lively, Penelope How It All Began

How It All Began 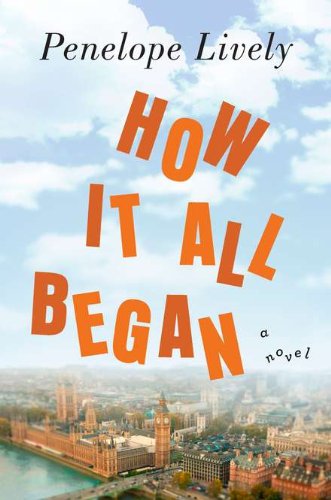 When Charlotte Rainsford, a retired schoolteacher, is accosted by a petty thief on a London street, the consequences ripple across the lives of acquaintances and strangers alike. A marriage unravels after an illicit love affair is revealed through an errant cell phone message; a posh yet financially strapped interior designer meets a business partner who might prove too good to be true; an old-guard historian tries to recapture his youthful vigor with an ill-conceived idea for a TV miniseries; and a middle-aged central European immigrant learns to speak English and reinvents his life with the assistance of some new friends.

Through a richly conceived and colorful cast of characters, Penelope Lively explores the powerful role of chance in people's lives and deftly illustrates how our paths can be altered irrevocably by someone we will never even meet. Brought to life in her hallmark graceful prose and full of keen insights into human nature, How It All Began is an engaging, contemporary tale that is sure to strike a chord with her legion of loyal fans as well as new readers. A writer of rare wisdom, elegance, and humor, Lively is a consummate storyteller whose gifts are on full display in this masterful work.

More stylish than many writers half her age . . . Lively knows a thing or two about storytelling . . . her candour is refreshing, and reminds us that you don't have to lie to yourself to live life finely until the very end (The Times)

An engaging read (Woman's Own)

Elegant and engrossing, this is a gently funny and touching portrait of the complex path life can take (Easy Living)

Contains some of Lively's funniest and most enjoyable character studies . . . she remains a sublime storyteller (Guardian)

Penelope Lively grew up in Egypt but settled in England after the war and took a degree in history at St Anne's College, Oxford. She is a Fellow of the Royal Society of Literature, and a member of PEN and the Society of Authors. She was married to the late Professor Jack Lively, has a daughter, a son and four grandchildren, and lives in Oxfordshire and London.

Penelope Lively is the author of many prize-winning novels and short story collections for both adults and children. She has twice been shortlisted for the Booker Prize; once in 1977 for her first novel, The Road to Lichfield, and again in 1984 for According to Mark. She later won the 1987 Booker Prize for her highly acclaimed novel Moon Tiger. Her novels include Passing On, shortlisted for the 1989 Sunday Express Book of the Year Award, City of the Mind, Cleopatra's Sister and Heat Wave.

Penelope Lively has also written radio and television scripts and has acted as presenter for a BBC Radio 4 program on children's literature. She is a popular writer for children and has won both the Carnegie Medal and the Whitbread Award.