Items related to The Rise of Western Christendom: Triumph and Diversity...

The Rise of Western Christendom: Triumph and Diversity 200-1000 AD (Making of Europe) 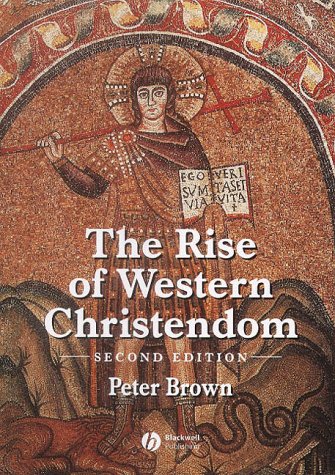 This book offers a vivid, compelling history of the first thousand years of Christianity. For the second edition, the book has been thoroughly rewritten and expanded. It includes two new chapters, as well as an extensive preface in which the author reflects on the scholarly traditions which have influenced his work and explains his current thinking about the book′s themes. New edition of popular account of the first 1000 years of Christianity. Thoroughly rewritten, with extensive new preface of author′s current thinking. Includes new maps, substantial bibliography, and numerous chronological tables.

"Most scholars would have been content to let a book as fine as the first edition of The Rise of Western Christendom rest on its laurels. Not so Peter Brown. He has taken note of the recent outburst of scholarship in this field, and has produced a yet richer work, which, with its extended notes and bibliography, will prove to be a mine for scholars and students for years to come." Ian Wood, University of Leeds


"This outstanding revision of The Rise of Western Christendom will make this the book for the next generation and will stimulate countless revisions of long–accepted interpretations of the period 400–1000." Thomas F. X. Noble, University of Notre Dame

"[The first edition] was a historical masterpiece before. But the author′s mind has moved on: The second edition contains further development, has filled out a great deal of detail, revised much in the light of more recent work, and, especially, has made it very much more useful for serious students by providing references and notes." Robert Markus, University of Nottingham

"In the second edition of his The Rise of Western Christendom: Triumph and Diversity, AD 200–1000, Brown sets shimmering fragments of historical insight into a mosaic that is all the more splendid for its well–judged architecture, resulting in what may come to stand as the most satisfying contribution of an unusually distinguished career. With time, The Rise of Western Christendom may emerge as a milestone in the search for an account of the fall of Rome that genuinely breaks free of Gibbon′s spell." Kate Cooper, Times Literary Supplement.

"With its dexterous and confident handling of an array of subjects and disciplines, and its exhaustive and detailed endnotes and bibliography, this book has encapsulated and synthesized a burgeoning field of scholarship at the point of perhaps its greatest creativity and imagination" The Atlantic Monthly

"It is an ashtonishing story, told in a way that keeps general themes clearly in sight while lovingly attending to the particularities of people, pracises and beliefs" First Choice

This book offers a vivid, compelling history of the first thousand years of Christianity. Ranging across the Christian world from China to Iceland, the narrative illustrates the diversity of Christian beliefs and practices. It also places the rise of Christianity in the context of other religious traditions, especially Islam. The author draws penetrating portraits of individuals and communities, from St Patrick and the Irish church to the Christian communities of Armenia and Mesopotamia. For the second edition, the book has been thoroughly rewritten and expanded. It includes two new chapters, on monasticism and Irish Christianity. The author has also added an extensive preface in which he reflects on the scholarly traditions that have influenced his work and explains his current thinking about the book's themes. The new edition contains new maps, a substantial bibliography, and a number of chronological tables to orient the reader.

Book Description Wiley & Sons, Incorporated, John. Hardcover. Condition: Good. A copy that has been read, but remains in clean condition. All pages are intact, and the cover is intact. The spine may show signs of wear. Pages can include limited notes and highlighting, and the copy can include previous owner inscriptions. At ThriftBooks, our motto is: Read More, Spend Less. Seller Inventory # G0631221379I3N00