Heelas, Paul The New Age Movement: Religion, Culture and Society in the Age of Postmodernity

The New Age Movement: Religion, Culture and Society in the Age of Postmodernity 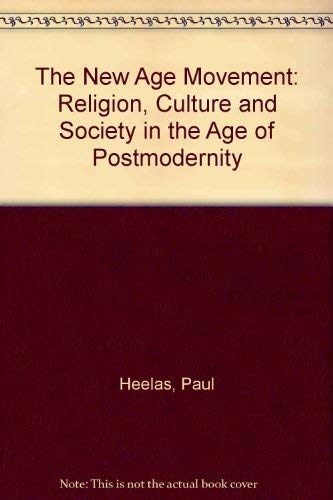 This is the first wide–ranging and accessible introduction to the fascinating subject of the New Age movement.

"Drawing on a vast and rich body of sources, Dr Heelas has produced a remarkably comprehensive picture of the multi–faceted contemporary New Age movement. His knowledge of everything from human potential movements to the new Gurdjieff–inspired religious systems and modern paganism is in itself no less impressive than his discerning commentary on what all this means for modern society. His deeply researched but lightly–worn scholarship informs every page, and anyone who wishes to get an understanding of the present–day fringe religious scene will need to acquaint themselves with this book." Dr B R Wilson, Emeritus Fellow of All Souls, University of Oxford

"A pioneering book, and a remarkable feat of sympathetic interpretation which will change the way we perceive the New Age. Paul Heelas makes sense out of a wider range of materials than I′d have believed possible. A book to buy and keep, as a document of our times." Don Cupitt, Emmanuel College, University of Cambridge

It should be clear from all of this that Heelas takes the New Age seriously and is able to point to it as cultural expression of modernity as well as, in some ways, a resource for modernity. Voices are often shrill and unidimensional in dealing with the New Ages; so his careful, searching judgements are surely welcome... Still, Heelas has contributed significantly to the small list of truly good books on the New Age movement. With its plethora of concrete examples, his work is rich in conveying the texture of the movement, and it is evenhanded in its evaluation of evidence and claims" Professor Catherine L. Albanese, Department of Religious Studies, University of California.

"Heelas′ work presents a particularly good introduction to the subject. Heelas′ book will be of great assistance to everyone interested in undertaking research into some aspect of the New Age Movement." Religion

"Paul Heelas has produced an extremely useful account of the new Age and this book will no doubt be a standard text for some time to come." Fiona Bowie, BASR Bulletin.

"We have long needed a scholarly and objective description and assessment of the New Age Movement, and at last Paul Heelas... has provided us with one... Comtemporary Christians in particular need to know why New Age ideas attract, and they need a guide through this perplexing welter of beliefs, therapies, lifestyles, hopes and aspirations. They could have none better than The New Age Movement." The Christian Parapsychologist

The New Age Movement represents one of the most facinating responses to the the defects and potentialities of modern times. In his ground–breaking work, Paul Heelas traces the growth and development of the Movement, identifies some of its key characteristics, and provides a critical perspective. This unique and extensively documented volume provides a balanced treatment of New Age ‘celebration of the self’, and situates it within the broader cultural context for the first time. It shows how the New Age is ambivalently related to modernity, offering both a radical spiritual alternative to the mainstream and a celebration of some of the characteristics features of modern life. Heelas thus iews the New Age both as an alternative counter cultural movement and as a spirituality of our times.


The volume, with it clarity of form and its critique of conventional opinion, serves as an excellent starting point and mature contribution to the study of contemporary spirituality. This will be a core text for courses on the Sociolofy of Religion, and should be of enormous interest to all those concerned with the study of culture and the utopian; anthropologists of modernity; historians of oppositional movements; theology students and clergy; and the New Age activists alike.

Buy Used
Condition: Good
A lot of light scratches, a few... Learn more about this copy

1. The New Age Movement: Religion, Culture and Society in the Age of Postmodernity