Items related to Linguistics and Literature (Blackwell Textbooks in... 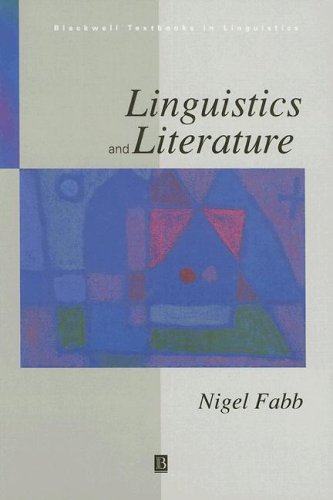 Linguistics and Literature is the first book to offer an overview of how linguistic theory can be applied to the oral and written literatures of the world.Introducing basic concepts in linguistics as it proceeds, the book begins with an account of the types of metrical verse and the phonological bases of metrics. Examples of metrical verse are illustrated from a selection of European, African, and Asian traditions, both familiar and unfamiliar; there is also some discussion of the setting of song texts to music. It then considers the exploitation of linguistic structure as found in many traditions, from ancient Semitic literatures to contemporary Austronesian and Mayan verbal arts. Narratology is presented from the perspective of linguistics, with complete narratives in the original languages with translations from a variety of traditions. The book concludes by looking at the linguistic aspects of the performance of literature, and the ways in which literature exploits the communicative function of language, in irony and metaphor.The book is illustrated with examples from around a hundred different literary traditions, quoting texts in the original languages, fully translated and explained. Exercises are provided which enable readers to put theoretical issues discussed in the chapters to practical analysis of texts; texts for discussion range from major works of English literature to previously unpublished oral texts from rarely discussed traditions.

"A consistent theoretical perspective, broad empirical coverage, and a lucid and engaging exposition make this not just a fine textbook but fascinating reading for anyone interested in language and verbal art. The detailed analyses of texts from oral literatures across the world are a unique and welcome feature. Fabb's book is an impressive demonstration of how the various strands of research in literary linguistics add up to a coherent field of inquiry." Paul Kiparksy, Stanford University "Fabb applies linguistic theory to mostly oral literature from around a hundred different languages and literary traditions."Moderna Sprak, Spring 1999 "In common with other books in Blackwell's Textbooks in Linguistics series, it provides exercises at the end of each chapter. Most of these are highly instructive (and challenging) both from the point of view of reinforcing discussion in the body of the text and in terms of extending that discussion, looking at new but related material....( Linguistics and Literature) should be of interest to anyone interested in language and literature. It should be of particular interest to those with a theoretical interest in questions of literary form. It provides an excellent overview of current thinking in literary linguistics as well as making its own contribution to that thinking."Adrian Pilkington, Royal Holloway University of London

1. Linguistics and Literature : Language in the Verbal Arts of the World

Book Description Wiley & Sons, Incorporated, John. Hardcover. Condition: Good. A copy that has been read, but remains in clean condition. All pages are intact, and the cover is intact. The spine may show signs of wear. Pages can include limited notes and highlighting, and the copy can include previous owner inscriptions. At ThriftBooks, our motto is: Read More, Spend Less. Seller Inventory # G0631192425I3N00