Items related to Reading Putnam (Philosophers and their Critics)

Reading Putnam (Philosophers and their Critics)

Reading Putnam (Philosophers and their Critics) 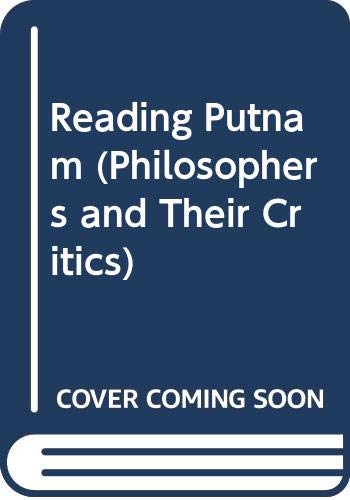 This volume, which arises out of the 1990 Gifford conference on the philosophy of Hilary Putnam, contains nine papers on central themes of Putnam's thought and its evolution. The contributors are Michael Hallett, Michael Dummett, Michael Redhead, Clark Glymour, Crispin Wright, David Wiggins, Tom Ricketts, Simon Blackburn and George Boolos. Each presents a major critical appraisal of Putnam's contribution to an area of current philosophical research. The volume also contains a substantial editorial introduction.

From the philosophy of mind and language, through physics and mathematics, to the philosophy of the human sciences, morality and religion, there is almost no area of philosophy to which Hilary Putnam has not made highly original and influential contributions. This wide–ranging collection of papers provides a critical assessment and exploration of Putnam′s Seminal Work. Written by Philosophers themselves well known for their work in the field, each essay bears witness to the continuing influence and importance of Putnam′s thought. Putnam′s reply constitutes an extensive new essay which clarifies, and develops further, central themes in his philosophy.


Peter Clark is Senior Lecturer in Philosophy at the University of St Andrews, Scotland. He co–edited Mind, Psychoanalysis and Science.

Bob Hale is Professor of Logic and Metaphysics at Glasgow University, Scotland. He is the author of Abstract Objects.

1. Reading Putnam (Philosophers and their Critics)

Book Description Wiley & Sons, Limited, John, 1994. Condition: Good. illustrated edition. Former Library book. Shows some signs of wear, and may have some markings on the inside. Seller Inventory # 700720-6