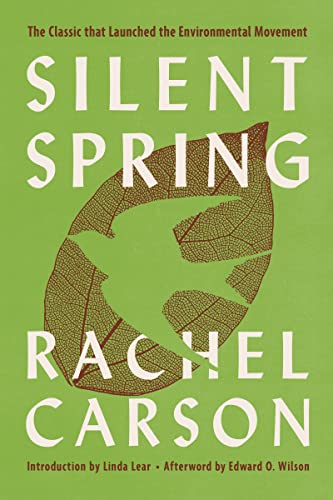 Rachel Carson's Silent Spring was first published in three serialized excerpts in the New Yorker in June of 1962. The book appeared in September of that year and the outcry that followed its publication forced the banning of DDT and spurred revolutionary changes in the laws affecting our air, land, and water. Carson's passionate concern for the future of our planet reverberated powerfully throughout the world, and her eloquent book was instrumental in launching the environmental movement. It is without question one of the landmark books of the twentieth century.

If anybody asked me to write about my hero, it would be Rachel Carson (A. S. Byatt)

Rachel Carson educated a planet... One of the most effective books ever written (Guardian)

Carson's book has changed the world (The Times)

Now recognised as one of the most influential books of the Twentieth Century, Silent Spring exposed the destruction of wildlife through the widespread use of pesticides. Despite condemnation in the press and heavy-handed attempts by the chemical industry to ban the book, Rachel Carson succeeded in creating a new public awareness of the environment which led to changes in government policy and inspired the modern ecological movement.

'Very few books change the course of history. Those that have include ... Silent Spring.' Linda Lear, author of Rachel Carson: Witness for Nature.