Items related to Joni Mitchell: The Complete Poems and Lyrics 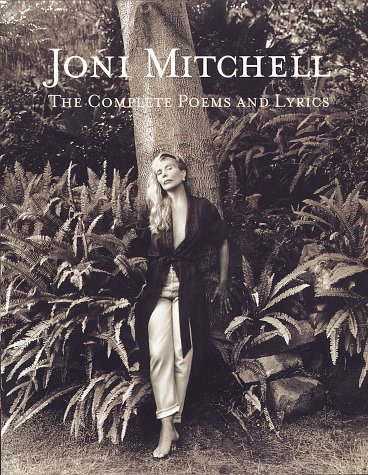 Commentary by the singer-songwriter and a selection of her line drawings accompany an anthology of some of her most important song lyrics and poetry, including works ranging from her first album to her 1994 Grammy-winning Turbulent Indigo and excerpts from her forthcoming album. 35,000 first printing.

Joni Mitchell has recorded twenty albums and is the winner of two Grammy Awards. She is also the recipient of, among many others, Canada's Governor General's Performing Arts Award and Billboard magazine's "Century Award." Ms. Mitchell was inducted into the Rock & Roll Hall of Fame in May 1997.
From the Trade Paperback edition.

ation of singer-songwriters who came to fame in the '60s, none has had more impact--or created a more evocative, bittersweet, literate, and reflective body of work--than Joni Mitchell. Today's music owes much to her innovation and inspiration. This complete collection of her poetry and song lyrics reads like a poem cycle that finds unexpected meaning and beauty on the page.

After displaying a haunting and sophisticated quality in her first albums, Joni Mitchell (1968), Clouds (1969), Ladies of the Canyon (1970), and Blue (1972), Mitchell reached her poetic apotheosis in the surreal and mythical Hejira (1976) and Don Juan's Reckless Daughter (1977). During the '80s, Mitchell used her words to explore and mirror the commercial energy of the decade. She became more reflective in the following years with Night Ride Home (1991) and Turbulent Indigo (1994). Mitchell continues to grow her already remarkable talent, as is evident with her latest work, Taming the Tiger (1998).