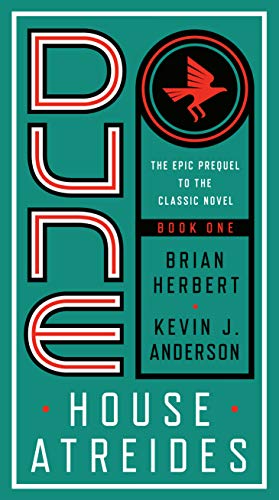 Book Description Paperback. Condition: New. Language: English. Brand new Book. Book One of the Epic Prequel to the Classic Novel Dune--Soon to Be a Major Motion Picture Step into the universe of Frank Herbert's Dune, one of the greatest science fiction novels of all time. Before Paul Atreides became Muad'Dib, the dynamic leader who unified the wild Fremen on the desert planet known as Dune . . . Before the evil Baron Harkonnen overthrew House Atreides and sent Paul and his mother Jessica fleeing into the deadly wasteland of sand . . . Before the secrets of the spice and the sandworms were discovered . . . There was another story . . . The tale of young Leto Atreides learning to become a ruler in the shadow of his great father. The tale of Baron Vladimir Harkonnen, ruthless tyrant who becomes a pawn of Bene Gesserit breeding schemes. The tale of Pardot Kynes, ambitious planetologist dispatched to the sands of Arrakis to understand the origins of the spice melange, the most valuable substance in the known universe. And the tale of Crown Prince Shaddam Corrino, whose lust for power leads him to plot the assassination of his own father and to create a plan that will replace the spice and disrupt the Imperium forever . . . Dune: House Atreides begins the epic worldwide bestselling trilogy that tells of the generation before Dune and sows the seeds for great heroes, vile enemies, and terrible tyrants. Look for the entire prequel seriesDUNE: HOUSE ATREIDES - DUNE: HOUSE HARKONNEN - DUNE: HOUSE CORRINO. Seller Inventory # ABZ9780593159606