Items related to The Stately Homo: A Celebration Of The Life Of Qu:... 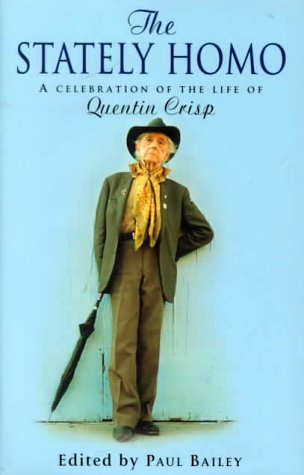 This work is a tribute to the unique character of Quentin Crisp, a flamboyant, gifted and genuine British eccentric and artist. It is designed to explore Quentin Crisp's life from a variety of angles. Many pieces in the book are reminiscences of Crisp's character and his idiosyncratic way of life, others are essays discussing gay politics and Crisp as a gay icon. Interspersed with the pieces are extracts from Crisp's own writings, showing his eternal dignity and graciousness, as in his comment to a gang of thugs who had beaten him in North London: "I seem to have annoyed you gentlemen in some way".

'Required reading for anyone whose life was touched by Crisp in some way. Which, whether we care to admit or not probably means most of us' Time Out 'All in all...a delight. I read the accounts with delight and much regret - at having never met in person the man we seem so reluctant to forget' The Pink Paper 'His graciousness and dignity shine through' Mail on Sunday

'You are a male person, I presume?' sneered the clerk of the court when Quentin Crisp was brought to trial on a charge of soliciting. Crisp successfully defended himself by arguing that if he had wanted to engage in clandestine sex he would hardly have set out to make himself so conspicuous. He had been arrested in the daytime by two police-men 'disguised as human beings', after stopping to chat with an acquaintance outside the Hippodrome Theatre.

The vicious clerk, who 'played to the gallery' at Bow Street Magistrates' Court, had stumbled on the truth about this extraordinary individual, who had recreated himself as a kind of androgyne. He wore women's clothes on only one occasion, and was disappointed because nobody paid him any attention. Dennis Pratt ('as my name was before I dyed it'), the boy from a typical suburban background, transformed himself into the bohemian who was Quentin Crisp, a man who looked like a woman, but wasn't.

The Stately Homo presents a multifaceted portrait of this unique, and uniquely amusing, character, with contributions from friends, admirers and critics. The book has been designed to explore his life from a variety of angles, with the aim of surprising those readers who think they have him pigeon-holed. His various careers - as a performer, artist's model, writer of a memorable autobiography and authority on style and etiquette - are examined with wit, affection and disinterested criticism. The Stately Homo is a tribute to one of the twentieth century's true English eccentrics.