Items related to The Venus Hunters 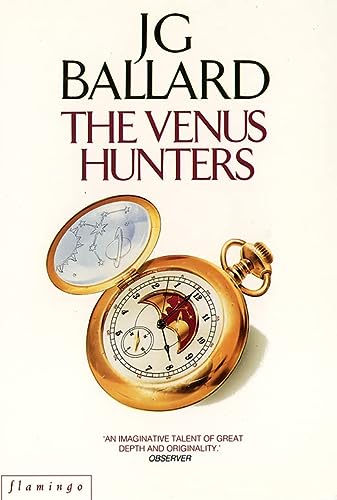 'Ballard is one of the few genuine surrealists in business, and seems to have a hotline to the most uncomfortable reality. At its most heightened, Ballard's prose is an impacted mass of images, dense and iridescent as mercury, stranger, you might say, than fiction.'
ANGELA CARTER, 'Guardian'

'His fantasies are explored with a maniac's logic and an artist's sensibilities.'
NEW STATESMAN

'J.G. Ballard is renowned for the diversity of his inventions and the richness of his descriptive language.'
TIMES LITERARY SUPPLEMENT

'He combines exotic symbolism with psychological insight, producing some of the most polished and concentrated prose we have in English.'
MICHAEL MOORCOCK

J.G. Ballard's talent is one of the most mysterious and distempered in modern English fiction.'
MARTIN AMIS

'He has an extraordinary descriptive gift, an eye for the mood and code of the visual environment that is like Poe's, but steadier. Ballard remains most effective in the tight capsule of the short story.'
RICHARD HOLMES, 'The Times'

J. G. Ballard was born in 1930 in Shanghai, where his father was a businessman. After internment in a civilian prison camp, he and his family returned to England in 1946. He published his first novel, The Drowned World, in 1961. His 1984 bestseller Empire of the Sun won the Guardian Fiction Prize and the James Tait Black Memorial Prize, and was shortlisted for the Booker Prize. His memoir Miracles of Life was published in 2008. J. G. Ballard died in 2009.

Book Description Granada Publishing. Paperback. Condition: Good. A copy that has been read, but remains in clean condition. All pages are intact, and the cover is intact. The spine may show signs of wear. Pages can include limited notes and highlighting, and the copy can include previous owner inscriptions. At ThriftBooks, our motto is: Read More, Spend Less. Seller Inventory # G0586051872I3N00

Book Description Paperback. Condition: Good. The book has been read but remains in clean condition. All pages are intact and the cover is intact. Some minor wear to the spine. Seller Inventory # GOR001368519

Book Description Paperback. Condition: Fair. A readable copy of the book which may include some defects such as highlighting and notes. Cover and pages may be creased and show discolouration. Seller Inventory # GOR002153257

Book Description Granada Publishing, 1980. Condition: Good. A+ Customer service! Satisfaction Guaranteed! Book is in Used-Good condition. Pages and cover are clean and intact. Used items may not include supplementary materials such as CDs or access codes. May show signs of minor shelf wear and contain limited notes and highlighting. Seller Inventory # 0586051872-2-4

Book Description Granada, 1992. Paperback. Condition: Used; Acceptable. Ex-library **Simply Brit** Shipped with Premium postal service within 24 hours from the UK with impressive delivery time. We have dispatched from our book depository; items of good condition to over ten million satisfied customers worldwide. We are committed to providing you with reliable and efficient service at all times. Seller Inventory # 2958241

Book Description Panther Books - Granada Publishing, London, 1980. Trade Paperback. Condition: Very Good. James Marsh (cover art) (illustrator). 1985 Reprint. This is a wide-ranging collection of typically bizarre Ballard short-story gems, dazzling excursions into the alien atmosphere of future worlds and the surreal machinery of the human mind. 142 pages. CONDITION: A Very Good copy of the 1985 reprint - bright, square, uncreased, and unmarked but for the previous owner's signature inside and two tiny marks on the Table of Contents page, with minimal shelf-wear and some age-tanning to its pages. This handsome copy is now in a clear, protective polypropylene bag. Size: 12mo - over 6ľ" - 7ľ" tall. Seller Inventory # SP721