Items related to Hitler's Children: Story of the Baader-Meinhof... 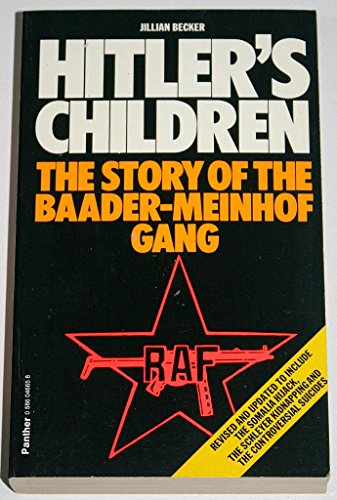 First published in 1977 in the US and Britain to universal critical acclaim, Hitler's Children quickly became a world-wide best seller, translated into many other languages, including Japanese. It tells the story of the West German terrorists who emerged out of the 'New Left' student protest movement of the late 1960s. With bombs and bullets they started killing in the name of 'peace'. Almost all of them came from prosperous, educated families. They were 'Hitler's children' not only in that they had been born in or immediately after the Nazi period - some of their parents having been members of the Nazi party - but also because they were as fiercely against individual freedom as the Nazis were. Their declared ideology was Communism. They were beneficiaries of both American aid and the West German economic miracle. Despising their immeasurable gifts of prosperity and freedom, they 'identified' themselves with Third World victims of wars, poverty and oppression, whose plight they blamed on 'Western imperialism'. In reality, their terrorist activity was for no better cause than self-expression. Their dreams of leading a revolution were ended when one after another of them died in shoot-outs with the police, or was blown up with his own bomb, or was arrested, tried, and condemned to long terms of imprisonment. All four leaders of the Red Army Faction (dubbed 'the Baader-Meinhof gang' by journalists) committed suicide in prison.

Jillian Becker's first three books were novels. She has also written short stories and articles, published on both sides of the Atlantic. She left Britain in 2007 to be near most of her children and grandchildren in California, where she now lives.

Book Description Paperback. Condition: Good. All orders are dispatched the following working day from our UK warehouse. Established in 2004, we have over 500,000 books in stock. No quibble refund if not completely satisfied. Seller Inventory # mon0004960848

4. Hitler s children. The Story of the Maader-Meinhof Gang

Book Description Condition: Used: Good. 1978 Granada Crease on the back cover of the book and down the spine, light wear around the edges, otherwise in good condition. Usually ships within 1-2 business days. Quality Books. Because We Care - Shipped from Canada. Seller Inventory # R14925S

Book Description Soft cover. Condition: Good. Second Printing. Hitlers Children are the Red Army Faction of urban guerrillas that terrorised Germany and inspired a new generation of global revolutionaries. A first rate piece of journalism in the best sense of the word . Ms Becker is the only person who has managed in recent years to tell me something which I had not heard before about these desperate, hysterical, perverted idealists whose revolt against authoritarianism . made them indistinguishable from fascists' THE TIMES 'Jillian Becker finds an uncanny similarity between those supposedly leftist views and those expressed in Mein Kampf more than 50 years ago' TIME An important and highly readable book, thoroughly researched and written with the pace and excitment of a crime thriller". TLS ---------------------------------------------------------------------------------------- 415 pages, b/w photographs ---------- Orders of $100.00 or more are shipped using tracked courier delivery services. Size: Approx 4˝ " Wide - 7" Tall. Seller Inventory # 000412