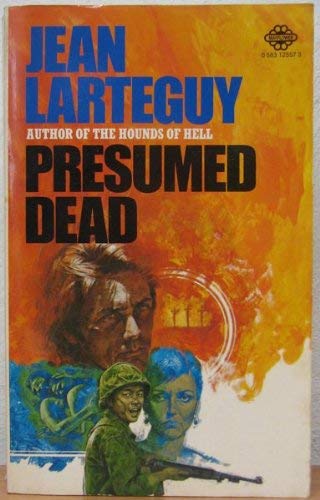 Jean Lartéguy (5 September 1920 - 23 February 2011)[1] was the nom de plume of Jean Pierre Lucien Osty, a French writer, journalist, and former soldier. He was born in 1920 in Maisons-Alfort, Val-de-Marne and died in 2011.[2] Larteguy is credited with first envisioning the "ticking time bomb" scenario in his 1960 novel Les centurions.[3] "Ron Clark seemed to have everything. Youth. Talent. Good looks. Plus a film-star father who had left hin a vast Swiss bank account. Then suddenly he took a dangerous, ill-paid job covering the war in Indochina for a TV company. And, one day, disappeared. Clark's Zurich bankers instruct Hans Brucker to find their valuable client - dead or alive. Brucker's search leads him to the women, from call-girls to countesses, who had wanted Clark but could not keep him; to Clark's progress through the hip, decadent, sex-and-drugs scene from Geneva to Paris, to London and New York. But it is in battle-ravaged Vietnam that Brucker learns the sickeningly violent truth - about Ron Clark and about a whole disturbed and disillusioned generation." (from the back cover) "Startling and horrific" MANCHESTER EVENING NEWS

Book Description Paperback. Condition: Fair. A readable copy of the book which may include some defects such as highlighting and notes. Cover and pages may be creased and show discolouration. Seller Inventory # GOR001834544

Book Description Paperback. Condition: Good. The book has been read but remains in clean condition. All pages are intact and the cover is intact. Some minor wear to the spine. Seller Inventory # GOR001831946

Book Description Mayflower, 1978. Paperback. Condition: Good. All orders are dispatched the following working day from our UK warehouse. Established in 2004, we have over 500,000 books in stock. No quibble refund if not completely satisfied. Seller Inventory # mon0001598893

Book Description Paperback. Condition: Very Good. The book has been read, but is in excellent condition. Pages are intact and not marred by notes or highlighting. The spine remains undamaged. Seller Inventory # GOR002601988

Book Description HarperCollins Distribution Services 1978-02-02, 1978. Paperback. Condition: Very Good. Item is in very good condition. If supplemental codes/CDs for textbooks are required please contact us prior to purchasing as they may be missing. Seller Inventory # DS-0583125573-2

Book Description Mayflower. Paperback. Condition: GOOD. Spine creases, wear to binding and pages from reading. May contain limited notes, underlining or highlighting that does affect the text. Possible ex library copy, thatâ ll have the markings and stickers associated from the library. Accessories such as CD, codes, toys, may not be included. Seller Inventory # 3035180956

Book Description Mayflower, 1978. Condition: Good. A+ Customer service! Satisfaction Guaranteed! Book is in Used-Good condition. Pages and cover are clean and intact. Used items may not include supplementary materials such as CDs or access codes. May show signs of minor shelf wear and contain limited notes and highlighting. Seller Inventory # 0583125573-2-4