Items related to The Origins of the First World War (Seminar Studies...

Martel, Gordon The Origins of the First World War (Seminar Studies in History)

The Origins of the First World War (Seminar Studies in History) 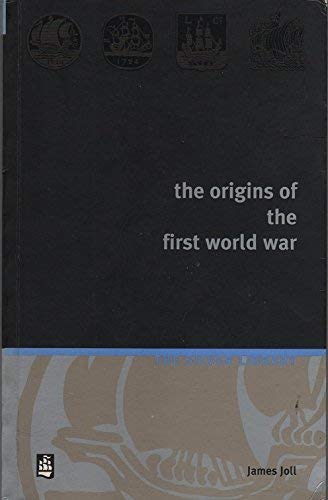 The Origins of the First World War

This famous series examines key themes in British, European and World history in short, succinct volumes. The text is supported by primary material in a Documents section, a full bibliography and an index; where appropriate there are maps, chronologies and glossaries. All the books in the series are written by experts in the field who are not only familiar with the latest research but have often contributed to it. Works of scholarship in their own right, the books also provide a survey of current historical interpretations. Longman has now inaugurated a major programme of renewal and expansion for Seminar Studies, with many new titles and new editions in the pipeline. Existing books are being re-presented in a larger, more reader-friendly format as they reprint; and new books and new editions are being reset into an entirely new page design.
____________________________________________________________________________
The Origins of the First World War deals with the policies and the issues that brought Europe to war in 1914. The position of each of the great powers within the international framework is concisely explained. The problems confronting them are also carefully analysed as is the influence of political and economic structures on the decision-making process. Professor Martel shows how and why the confrontational alliance system came into being and considers the impact upon it of the series of crisis that brought the major powers close to conflict in the opening years of the twentieth century. He outlines the terms and obligations that these alliances entailed and discusses the extent to which they were responsible for the outbreak of war.
First published in 1987, The Origins of the First World War has proved itself an invaluable aid to students. For this Second Edition Gordon Martel has completely rewritten his original text in the light of recent scholarship. He has also updated the bibliography and added a number of useful reference tools which will help readers to grasp the details more easily. Thus, the main text is now supplemented not simply by a chronology of the main events, but also by a biographical guide to the personalities mentioned in the book, a glossary of terms, and five maps.
Gordon Martel is Professor of International History at the University of Northern British Columbia, Canada and Senior Research Fellow at De Montfort University.
Cover- Princess Patricia s Canadian Light Infantry repel German attack at St Floi, near Ypres, in March 1915 (detail of painting by W B Wollen, 1915). Reproduced courtesy of Peter Newark s Military Pictures.

Gordon Martel is Professor of International History at the University of North British Columbia, Canada.

1. THE ORIGINS OF THE FIRST WORLD W