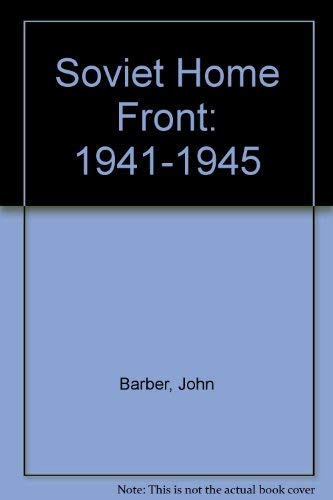 The events of World War II remain among the most tragic of the 20th century. In Eastern Europe, World War II was bloody and destructive to a degree far exceeding the experience of western Europe, or of the Mediterranean or Pacific theatres. Of all nations, it was the Soviet Union which paid by far the highest price for victory. How did Soviet society respond to the threat, then the reality of was with Germany? How did the USSR's political and economic system stand up to the colossal strain of an invasion which penetrated deep into Soviet territory, and to the immense burden of total war? How did Soviet leaders rally their people, and their resources? How did Soviet people live, work and eat in wartime? What role was played by their British and American allies? How did the wartime experience change the USSR's social, multinational, and economic order, and influence its political future? These are the questions which this book seeks to answer. The book will be published during the 50th anniversary commemorations of decisive events - the German invasion (June 1941); the battles of Leningrad (September 1941-January 1944), Moscow (September 1941 - spring 1942) and Stalingrad (August 1942 - January 1943); the Moscow "panic" (October 1941), Stalin's historic November 1941 Revolution Day speeches. The book's conclusions demonstrate that these events had consequences which are not yet over, even 50 years later. The text assumes no prior knowledge of Soviet history and is considered ideal for students, for the general reader and for teachers of Russian and Soviet history.

Book Description Longman, 1995. Condition: Good. A+ Customer service! Satisfaction Guaranteed! Book is in Used-Good condition. Pages and cover are clean and intact. Used items may not include supplementary materials such as CDs or access codes. May show signs of minor shelf wear and contain limited notes and highlighting. Seller Inventory # 0582009642-2-4