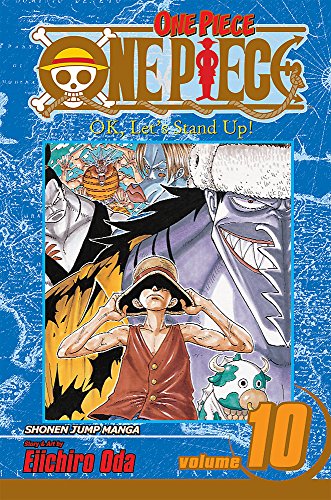 Luffy's navigator Nami has been double-crossing Saw-Tooth Arlong to steal enough treasure to buy back her village. In return, the pirate has handed over her fortune to the Navy. Now Luffy and his crew prepare to risk their lives for Nami's sake against their most ruthless opponent yet. Rated for teens.

As a child, Eiichiro Oda was inspired by pirates and aspired to become a manga artist. At the age of 17, he submitted his work "Wanted" and it won several awards. At the age of 19, he worked as an assistant to Nobuhiro Watsuki on the manga Rurouni Kenshin. During this time, he drew Romance Dawn, the first chapter of One Piece. In 1997, One Piece appeared for the first time in the magazine Shonen Jump and promptly became one the most popular manga in Japan.

Book Description Paperback. Condition: Very Good. The book has been read, but is in excellent condition. Pages are intact and not marred by notes or highlighting. The spine remains undamaged. Seller Inventory # GOR002320847

Book Description -. Paperback. Condition: Very Good. One Piece Volume 10: v. 10 (MANGA) This book is in very good condition and will be shipped within 24 hours of ordering. The cover may have some limited signs of wear but the pages are clean, intact and the spine remains undamaged. This book has clearly been well maintained and looked after thus far. Money back guarantee if you are not satisfied. See all our books here, order more than 1 book and get discounted shipping. Seller Inventory # 7719-9780575080980

Book Description Gollancz 15/11/2007, 2007. Paperback. Condition: Very Good. Shipped within 24 hours from our UK warehouse. Clean, undamaged book with no damage to pages and minimal wear to the cover. Spine still tight, in very good condition. Remember if you are not happy, you are covered by our 100% money back guarantee. Seller Inventory # 6545-9780575080980