Items related to Demonstorm: The Legends of the Raven 3 (GOLLANCZ S.F.)

Barclay, James Demonstorm: The Legends of the Raven 3 (GOLLANCZ S.F.)

Demonstorm: The Legends of the Raven 3 (GOLLANCZ S.F.) 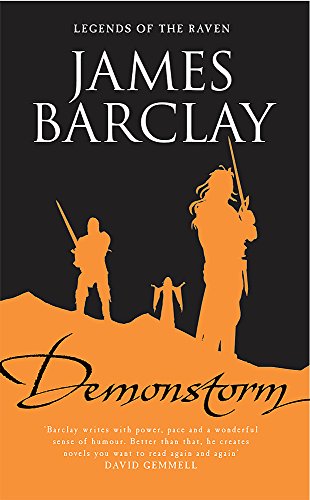 The dragons have gone home, the elves are safe. The Raven have kept their promises. But fate has not finished with them.
As the war between the colleges rages on an old enemy senses that his chance to revenge a bitter defeat has come. Tessaya, Lord of the Paleon Tribes has waited patiently for his moment and now, with Balaia in flames, he makes his move and unleashes the Wesmen hordes.
In Xetesk, his forces scattered, Dystran, Lord of the Mount faces certain defeat by the Wesmen unless he unleashes the horrfying power of dimensional magics. And Dystran has not come this far to be beaten at the last by a rabble of ignorant tribesmen. And so the veil between dimensions is torn . . .

And beyond, a predatory evil stirs. Demons catch the scent of countless souls in Balaia.

Can even the Raven prevail when the world is coming to an end?

A fantasy milestone is reached. James Barclay brings his sensational saga of The Raven to a heartstopping conclusion.

Again the war-ravaged continent Balaia is in big trouble. Bigger than ever. Attacked for excellent reasons by the barbarian Wesmen, the magical college of Xetesk desperately misuses its doomsday weapon of "dimensional magic", and tears a hole between realms. Endless hordes of demons come swarming through, eager to make Balaia their new home. No ordinary weapon will kill them, but they can drain human souls with just a touch. The odds are, as always, impossible.

Meanwhile, after dealing severely with impostors who took their name in vain, the weary, scarred survivors of The Raven have given up war and retired to the sunny southern continent. You can't run away from the end of the world, though, and more than one world faces extinction. The demon beachhead threatens the realms of the dragons and even the dead:

"You know how I said The Raven would never ride again? Seems I was lying."

Barclay pushes his characters to the ragged edge and beyond, as they fend off inexhaustible demon armies, suffer heavy losses in nightmare treks across occupied territory, and weaken day by day while the enemy grows ever stronger. One mad possibility remains, a commando raid into the demon dimension where their strength is greatest...

The tension is unremitting, the action unsparing. There's less room for Barclay's usual glints of humour in the long slog of fighting for what any sane mercenary should recognize as a lost cause. Still, The Raven has always managed to win through, though at great cost. Demonstorm battles its way to an appropriate finish, and delivers the goods--though this must surely be The Raven's last adventure. Edge-of-the-seat stuff.--David Langford

Demonstorm brings James Barclay's Legends of the Raven to a rip-roaing close. If non-stop action, blood and guts is your thing, look no further. (STARBURST)

Domonstorm shatters the concept of 'comfort fantasy'. It's an intense, unsettling story. The strength of the human spirit and the dangers of self-doubt feature most prominently, adding a welcome depth to so much death and destruction. (Sandy Auden SFX magazine)