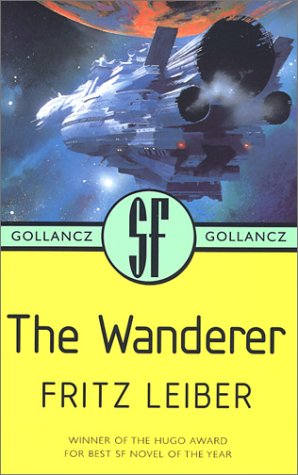 All eyes were watching the eclipse of the Moon when the Wanderer came. Only a few scientists had even suspected its presence, and then, suddenly, it was there, dwarfing and threatening the Moon and wreaking havoc with Earthżs tides and weather. The huge, garishly coloured artificial world has only stopped in the Solar system to refuel but its mere presence is a catastrophe for the inhabitants of Earth, who all struggle in their different ways to survive the climatic chaos it unleashes. A brilliant description of the of the days of chaos as total destruction threatens the Earth.

Fritz Leiber (1910-1992) studied psychology and physiology at the University of Chicago and then spent a year at a theological seminary. He worked as an editor for the Science Digest, acted (he came from a theatrical family) and was a drama teacher before turning to writing. He is particularly well known for his fantasy writing but his other sf includes The Big Time, which also won a Hugo.

Book Description Trade. Condition: New. Square, solid, and unread, with perfect spine -- what more could you ask for? When you receive this book, you'll feel as though you've received a rare gift from one of Scheherazade's fabled djinn! You MAY even cartwheel with glee! NOTE: IN archival bag for protection. Remainder dot to page bottoms. Seller Inventory # 022677