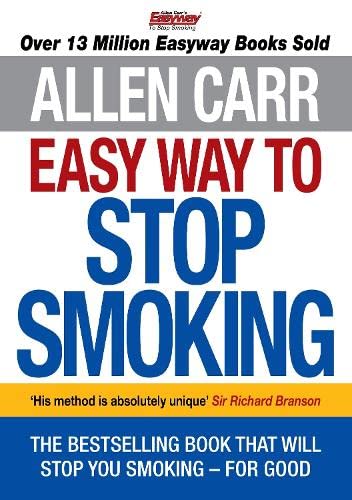 'If you follow my instructions you will be a happy non-smoker for the rest of your life.'

That's a strong claim from Allen Carr, but as the world's leading quit smoking expert, Allen was right to boast!

This classic guide to the world's most successful stop smoking method is all you need to give up smoking. You can even smoke while you read. There are no scare tactics, you will not gain weight and stopping will not feel like deprivation. If you want to kick the habit then go for it.

"I would be happy to give a medical endorsement of the method to anyone."
Dr PM Bray MB CH.b., MRCGP

"A different approach. A stunning success"
The Sun

"His method is absolutely unique, removing the dependence on cigarettes, while you are actually smoking."
Richard Branson

"I found it not only easy but unbelievably enjoyable to stay stopped."
Sir Anthony Hopkins

I was exhilarated by a new sense of freedom (Independent)

Allen Carr was born in 1934. The first in his family to enter the 'professions', he received articles from a prestigious firm of City accountants and began a career in a business he soon came to loathe. After filling a series of highly paid positions, punctuated by a two-year stint in the army as part of his country's National Service programme, Allen reached the nadir of his disillusionment with accountancy. Fed up with the old boys' network and complacent attitude, he took a completely different direction, starting a property development business, initially with a friend and later striking out on his own with his wife, Joyce. By this point in his life, Allen was chain-smoking 100 cigarettes a day, despite the fact that his older sister, Marion, and his father had died prematurely of lung cancer. After repeated failed attempts to stop smoking, Allen's conversion into a non-smoker was as dramatic as it was totally unexpected. His discovery of the kernel of what would become the Easyway method brought about another life-changing decision: to dedicate his life to the fight against nicotine addiction. Allen made this decision in July 1983. Since then he has built Easyway into an international brand with clinics in over 20 countries across the world, and developed his method into the most effective stop smoking therapy currently available. In 2006 Allen was diagnosed with lung cancer and passed away that November.