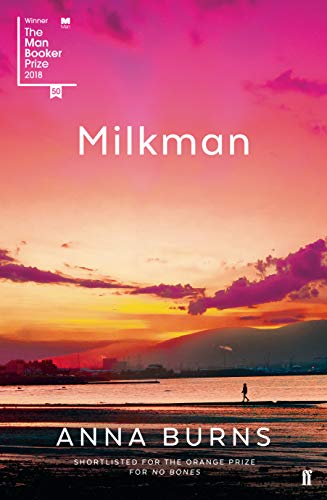 WINNER OF THE MAN BOOKER PRIZE 2018

'Milkman is extraordinary. I've been reading passages aloud for the pleasure of hearing it. It's frightening, hilarious, wily and joyous all at the same time.' - Lisa McInerney, author of The Glorious Heresies

In this unnamed city, to be interesting is dangerous. Middle sister, our protagonist, is busy attempting to keep her mother from discovering her maybe-boyfriend and to keep everyone in the dark about her encounter with Milkman. But when first brother-in-law sniffs out her struggle, and rumours start to swell, middle sister becomes 'interesting'. The last thing she ever wanted to be. To be interesting is to be noticed and to be noticed is dangerous.

Milkman is a tale of gossip and hearsay, silence and deliberate deafness. It is the story of inaction with enormous consequences.

The narrator of Milkman disrupts the status quo not through being political, heroic or violently opposed, but because she is original, funny, disarmingly oblique and unique: different. The same can be said of this book. (Claire Kilroy Guardian)

Anna Burns is part of a movement of new and established female Belfast writers... along with Lucy Caldwell, Roisín O'Donnell, Jan Carson and others.

Kenneth Tynan pointed out that a good critic perceived what was happening but a great critic also saw what was not happening. In Belfast for many years there was a lot of not happening. The men of violence who launched the city's 30-year-long suicide attempt tried to silence the women who mocked them for their macho stupidity and faux intellectual posturing. The women were never silent but now thank goodness they are being published in increasing numbers.
Milkman is both a story of Belfast and its particular sins but it is also a story of anywhere. It reminded me of China Mieville's The City and the City where identity, names and seeing the Other are contentious acts. Milkman shares this level of ambition; it is an impressive, wordy, often funny book and confirms Anna Burns as one of our rising literary stars.

From the outset, Milkman is delivered in a breathless, hectic, glorious torrent. The pace doesn't let up for a single moment.... Milkman can sometimes feel like a nerve-jangling reading experience; exhausting, even. Yet those who stick with Ann Burns' hectic, stream-of-consciousness writing, not dissimilar to that of Eimear McBride or Flann O'Brien, are more than rewarded.
Her writing has been described as "point-blank poetry", and rightly so. Her grasp on Middle sister's voice is so confident, and the textures of the environment, with its politics both big and small, are a thing to behold. It's an astute, exquisite account of Northern Ireland's social landscape, but Milkman is much more than that, too. It's also a coming-of-age story with flecks of dark humour, yet at other points it's a damning portrait of rape culture, and how women are often regarded in communities like this one. Because of this, Milkman is a potent and urgent book, with more than a hint of barely contained fury.

Mercurial. Profound. Hilarious. Brilliant. I've been waiting for a book like this for thirty years. (Eoin McNamee)

'Original and thought-provoking. There have been many novels written about scarred post-Troubles Northern Ireland; I applaud Belfast-born Anna Burns for finding an insightful approach which frees it from the usual cliches and narratives. She avoids the weight-bearing vocabulary of her subject by setting Milkman in an unnamed city, divided by two tribes both bearing the brunt of an oppressive patriarchal regime.

Burns ingeniously draws comparisons between the hypocrisies and injustices of a sectarian society and the troubled and misunderstood experience of female adolescence. That she successfully tackles her serious mission with razor sharp wit, warm humour and great compassion is even more impressive. This one's a keeper.'

Milkman is remarkable. A tale told by a voice that's utterly compelling and which you read with the feeling that you're being led down the darkest of rabbit holes. Irresistible and disturbing. (Jess Kidd)

I thought this was an incredible book and I'm still reeling from it. Anna Burns brilliantly mines the interstices of language to give articulation to the slippery machinations of prejudice and intimidation. She describes those things which are never normally described - those marginalised experiences created by insidious, corrosive and unnameable hurts... Her writing is uncompromising, powerful, essential. (Michele Forbes, author of Ghost Moth)

SHORLTISTED FOR THE BOOKER PRIZE 2018

In this unnamed city, to be interesting is dangerous. Middle sister, our protagonist, is busy attempting to keep her mother from discovering her maybe-boyfriend and to keep everyone in the dark about her encounter with Milkman. But when first brother-in-law sniffs out her struggle, and rumours start to swell, middle sister becomes 'interesting'. The last thing she ever wanted to be. To be interesting is to be noticed and to be noticed is dangerous.

Milkman is a tale of gossip and hearsay, silence and deliberate deafness. It is the story of inaction with enormous consequences.

Book Description Faber & Faber, 2018. Hardcover. Condition: New. Dust Jacket Condition: New. 1st Edition. First edition, first printing. SIGNED to title-page in blue fountain pen ink. A brilliant copy that must nudge towards the unique: additionally bearing the KEY DATE, added by Anna Burns, of "16th October 2018." This was, of course, the date she was awarded the prestigious prize and therefore represents the most desirably apt of copies. As such, one of the strongest of all Booker highlights over recent times. The entry ticket provenance is included. In perfect condition. Very Fine in the correct, first state dust-wrapper (three blurbs to jacket rear, and no Booker mention), carefully selected, and without any detractions. Additionally supplied with the promotional Booker Shortlist bookmark. Offered by D B WATERS RARE BOOKS: Professional, full-time booksellers of fine, select 1st editions, established in 1998. All our stock is fully guaranteed as authentic, a sample of which is presented here on this website. As long-established specialist sellers, we never stock any first edition that is devalued by serious flaws such as price-clipping, dedications, remainder dots, or owner markings, etc. A small, boutique business with an enviable client base. Managed by David, a holder of a Masters degree in Modern Fiction from the UEA, and published author by Nightjar Press. Contact us for friendly assistance in building your collection of modern highlights. Signed by Author(s). Seller Inventory # 000233