Items related to Nothing is True and Everything is Possible: Adventures...

Pomerantsev, Peter Nothing is True and Everything is Possible: Adventures in Modern Russia

Nothing is True and Everything is Possible: Adventures in Modern Russia 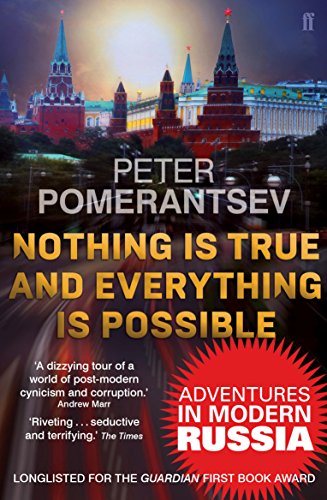 A journey into the glittering, surreal heart of 21st century Russia: into the lives of Hells Angels convinced they are messiahs, professional killers with the souls of artists, bohemian theatre directors turned Kremlin puppet-masters, supermodel sects, post-modern dictators and oligarch revolutionaries.

This is a world erupting with new money and new power, changing so fast it breaks all sense of reality, where life is seen as a whirling, glamorous masquerade where identities can be switched and all values are changeable. It is home to a new form of authoritarianism, far subtler than 20th century strains, and which is rapidly expanding to challenge the global order.

An extraordinary book - one which is as powerful and entertaining as it is troubling - Nothing is True and Everything is Possible offers a wild ride into this political and ethical vacuum.

Pomerantsev is one of the most brilliant observers of Putin's Russia ... an electrifying, terrifying book. (Anne Applebaum)

A riveting account of the creation of Putin's Russia. (The Guardian)

[A] riveting, urgent book ... Pomerantsev is one of the most perceptive, imaginative and entertaining commentators writing on Russia today and, much like the country itself, his first book is seductive and terrifying in equal measure. (Ben Hoyle The Times)

The shapeshifters, ultracynics, sleazeballs and forsaken victims in Peter Pomerantsev's elegantly seething alternative history convey more about the truth - and the lies - of Putinism than could reams of Kremlinology. Unflinching, tragic and profound. (AD Miller, author of SNOWDROPS)

Although Putin is rarely mentioned, this book is one of the finest accounts we have of the grotesque nihilism of his system ... required reading for anyone seeking to understand Putin's Russia, and useful antidotes for anyone - on the right or left - who somehow remains convinced that it represents a purer alternative to the wicked west. (Oliver Bullough The Observer)

One of the most disturbing books I've read for a very long time ... a dizzying tour of Vladimir Putin's Russia, a world of post modern cynicism and corruption. (Andrew Marr)

Chilling ... Nothing is True and Everything is Possible is more than an evocative travelogue or an insight into a new system of authoritarian control, although it is both of these. It's also a hammer to the glass, an alarm rung out across the liberal world. (Charlotte Hobson The Spectator)

Written with sparkle and a fluidity that leaves corners torn in the rush to turn the page this book is a rock'n'rouble rollercoaster of a ride. (Marco Giannangeli Daily Express)

Peter Pomerantsev has written the most bitter indictment of a nation's politics and society going wrong since William Shirer's 1941 Berlin Diary. Pomerantsev has also written a calm and incisive report on the current state of affairs in Russia. Yet it reads like a comedy of manners, a dark and grotesque comedy of manners, a State Department white paper co-authored by Evelyn Waugh and Franz Kafka. And not only that, but Nothing Is True is a bildungsroman, too. (P.J. O'Rourke World Affairs Journal)

The essential book on the New Russia, and how it's travelled from communist collapse to a new form of dictatorship.

1. Nothing Is True &amp; Everything Is Possible

2. Nothing Is True &amp; Everything Is Possible

3. Nothing Is True & Everything Is Possible