Items related to The Verdict of Peace (Pride and Fall sequence)

Barnett, Correlli The Verdict of Peace (Pride and Fall sequence)

The Verdict of Peace (Pride and Fall sequence) 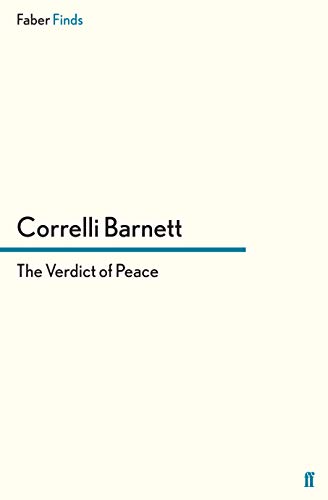 Correlli Barnett's 'Pride and Fall' sequence on the decline of British power and influence in the twentieth century concludes with this majestic, controversial study. Between the outbreak of the Korean War in 1950 and the Suez debacle of 1956, Barnett argues, Britain squandered every chance to re-invent itself as an industrial nation. While Japan and Germany progressed and innovated, Britain stagnated, leaving other countries to dominate market share in new technologies.

'Barnett's demolition both of British nuclear pretensions and the Suez fiasco is devastating... His argument that 'global overstretch' depleted British resources after 1945 would meet with widespread agreement... Some of his best pages are on the weakness of education... Barnett's analysis of our failure to modernise industries like cars and shipbuilding, develop (British-invented) computers or promote long-term public investment would be endorsed by every motorist or rail commuter.'
Kenneth O. Morgan, Independent

Faber Finds is devoted to restoring to readers a wealth of lost or neglected classics and authors of distinction. The range embraces fiction, non-fiction, the arts and children's books. For a full list of available titles visit www.faberfinds.co.uk. To join the dialogue with fellow book-lovers please see our blog, www.faberfindsblog.co.uk.

Correlli Barnett is a world-renowned historian with particular prowess in military, naval, economic and social subjects. Faber Finds are reissuing his four volume The Pride and Fall sequence: The Collapse of British Power, The Audit of War, The Lost Victory, The Verdict of Peace, as well as The Swordbearers, Britain and her Army, 1509-1970 (winner of the Royal Society of Literature Heinemann Award) and Engage the Enemy More Closely (winner of the Yorkshire Post Book of the Year Award).

Book Description Taschenbuch. Condition: Neu. nach der Bestellung gedruckt Neuware - Between the outbreak of the Korean War in 1950 and the Suez debacle of 1956, this title argues, Britain squandered every chance to re-invent itself as an industrial nation. 734 pp. Englisch. Seller Inventory # 9780571283729