Items related to Days Without End 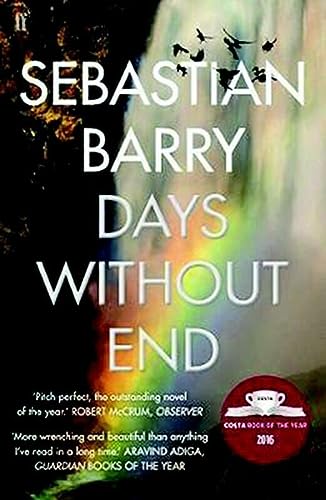 'Pitch perfect, the outstanding novel of the Year.' Observer

After signing up for the US army in the 1850s, aged barely seventeen, Thomas McNulty and his brother-in-arms, John Cole, fight in the Indian Wars and the Civil War. Having both fled terrible hardships, their days are now vivid and filled with wonder, despite the horrors they both see and are complicit in. Then when a young Indian girl crosses their path, the possibility of lasting happiness seems within reach, if only they can survive.

A beautiful, savage, tender, searing work of art. Sentence after perfect sentence it grips and does not let go. (DONAL RYAN)

A true leftfield wonder: Sebastian Barry's Days Without End is a violent, superbly lyrical western offering a sweeping vision of America in the making [and] the most fascinating line-by-line first person narration I've come across in years. (KAZUO ISHIGURO)

I am a huge fan - nobody writes like, nobody takes lyrical risks like, nobody pushes the language, and the heart, and the two together, quite like Sebastian Barry does, so that you come out of whatever he writes like you've been away, in another climate. (ALI SMITH)

A book about cruel times, for cruel times. And tender enough to swell your throat ... Not since Peter Carey's Ned Kelly has a narrative voice so got inside my head. (Tom Sutcliffe BBC Radio 4)

The novel comes close to being a modern masterpiece. Written in a style that is as delicate and economical as a spider's web, it builds to a climax that is as brutally effective as a punch to the gut ... The Secret Scripture and A Long Long Way were shortlisted for the Man Booker Prize and there is every reason to think that this novel could do just as well next year. It could even go a stage farther. It really is that good. (Robert Douglas-Fairhurst The Times)