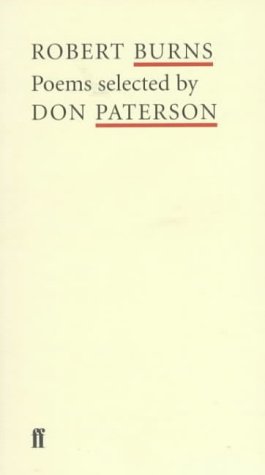 Don Paterson selects poems by Robert Burns for this volume from Poets' Selections' - a series in which contemporary poets introduce an earlier poet that they particularly admire.

Don Paterson was born in Dundee in 1963. He is the author of Nil Nil (1993), winner of the Forward Prize for Best First Collection; God's Gift to Women (1997) - winner of both the T. S. Eliot Prize and the Geoffrey Faber Memorial Prize; and Landing Light (2003), which won both the T. S. Eliot Prize and the Whitbread Prize for Poetry. Rain, his most recent collection, won the Forward Prize for Best Collection in 2009, the same year that he was awarded the Queen's Gold Medal for Poetry. He has also published versions of Antonio Machado (The Eyes, 1999) and Rainer Maria Rilke (Orpheus, 2006), as well as two collections of aphorisms.