Items related to The Death of Tragedy

The Death of Tragedy 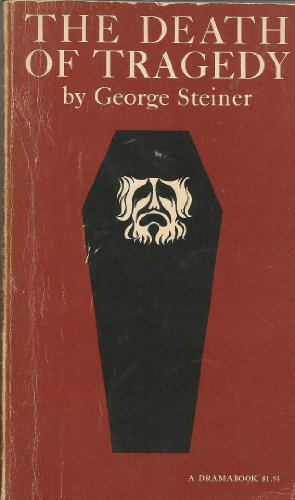 ""This book is important--and portentous--for if it is true that tragedy is dead, we face a vital cultural loss. . . . The book is bound to start controversy. . . . The very passion and insight with which he writes about the tragedies that have moved him prove that the vision still lives and that words can still enlighten and reveal.""-R.B. Sewall, New York Times Book Review

Born in Paris in 1929, George Steiner was educated in France, the USA and Britain. After a Rhodes Scholarship to Balliol, he joined the editorial staff of The Economist in 1952. In 1956 he was elected a member of the Institute for Advanced Study in Princeton. There he wrote Tolstoy or Dostoyevsky (1960) and began The Death of Tragedy (1961). In 1964 he published Anno Domini, a book of three novellas dealing with the aftermath of the Second World War. Language and Silence was published in 1967. His other work includes Proofs and Three Parables, which Faber published in 1992.George Steiner lives in Cambridge, where he has been Extraordinary Fellow of Churchill College since 1969. He has received numerous awards, including a Guggenheim Fellowship and the Chevalier de la Légion d'Honneur. He has been awarded the Commandeur dans l'ordre des Arts et des Lettres. In 1994 he became the first Lord Weidenfeld Professor of Comparative Literature at Oxford.

1. The Death of Tragedy

Book Description Faber & Faber, Limited. Paperback. Condition: Good. A copy that has been read, but remains in clean condition. All pages are intact, and the cover is intact. The spine may show signs of wear. Pages can include limited notes and highlighting, and the copy can include previous owner inscriptions. At ThriftBooks, our motto is: Read More, Spend Less. Seller Inventory # G057105658XI3N00

3. The Death of Tragedy

Book Description Faber and Faber, 1974. Paperback. Condition: Good. Previous owners name inside front page. Good condition is defined as: a copy that has been read but remains in clean condition. All of the pages are intact and the cover is intact and the spine may show signs of wear. The book may have minor markings which are not specifically mentioned. Most items will be dispatched the same or the next working day. Seller Inventory # mon0013152138

4. The Death of Tragedy

Book Description Paperback. Condition: Very Good. The book has been read, but is in excellent condition. Pages are intact and not marred by notes or highlighting. The spine remains undamaged. Seller Inventory # GOR002946441

5. The Death of Tragedy

Book Description Hill and Wang, 1963. Condition: Good. A+ Customer service! Satisfaction Guaranteed! Book is in Used-Good condition. Pages and cover are clean and intact. Used items may not include supplementary materials such as CDs or access codes. May show signs of minor shelf wear and contain limited notes and highlighting. Seller Inventory # 057105658X-2-4

6. The Death of Tragedy

7. The Death of Tragedy