Items related to Doctor Who: Parallel 59 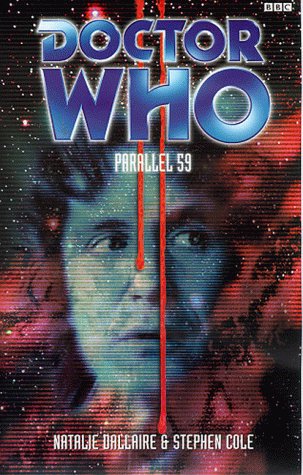 When an outpost in space begins to break up, with the TARDIS crew aboard, escape is only possible in tiny life-capsules. Fitz is bundled unconscious into one, while the Doctor and Compassion take another. Steering the capsule back to its planet of origin to try and get help, the Doctor finds a hostile welcome awaits. Fitz's capsule takes him to the apparent safety of the colony of Mechta. The Doctor decrees that Fitz's new-found utopia must be totally destroyed.

We're straight into the action in Parallel 59; the Doctor, Compassion and Fitz are hurrying to get themselves into escape capsules to get away from a space station. Fitz takes one capsule while the Doctor and Compassion take another. Compassion manages to use a psychic link of some form to steer their capsule down onto the planet Skale where the military promptly arrest them as spies and try to find out how much they know.

Fitz meanwhile finds himself in a place called Mechta, a kind of hospital city where citizens from 'homeworld' are sent to recuperate until they are summoned to return. On Mechta everyone is equal and Fitz is given a house and a job, and before long has two girlfriends but no cigarettes.

The people on Skale are hostile, suspicious and brutal. People are routinely experimented on and tortured and the Doctor finds it hard to find anyone who will listen to him. Compassion on the other hand manages to escape and joins forces with a group of rebels intent on overthrowing the governors. On Mechta, Fitz joins up with some dissidents who are trying to discover the truth about their city and the bureaucrats to appear to run it.

It's when the reader learns what and where Mechta is and how it relates to the events on Skale that the book starts to get interesting. Up until that point, however, it is a very 'black' and 'white' read. Characters all have very singular motivations, and the oppressive regime on Skale serves to render most of the people there as somewhat one-dimensional.

Despite this, Dalliere and Cole have crafted an interesting story, one with moral dimensions as well as plenty of action and excitement. There's also not a continuity reference in sight (aside from occasional non-intrusive references to past events in Fitz and Compassion's lives) which is always refreshing. The book continues the idea started in the previous book Frontier Worlds of having some parts written from the point of view of Fitz (via a diary which comes over a little contrived) but Compassion is unfortunately back to her red-headed enigmatic self. It's a shame that most authors don't seem to be able to imbue her with a proper character, one which might make the reader like her a little more.

For once we have a Doctor Who adventure in which the Doctor does not have all the answers and in which a lot of people die, indirectly due to the Doctor's intervention. At the end, the people of Scale are seen to have learned something from their experiences, but it's all very bleak and the Doctor, Fitz and Compassion hopping off in the TARDIS seems at odds with this somehow.

It's an enjoyable book, though, easy to read and undemanding. --David Howe

Another adventure of the time-travelling Doctor, in which Doctor Who finds a hostile welcome awaiting him on the Planet Skale.