Items related to The Wolf of Wall Street

The Wolf of Wall Street 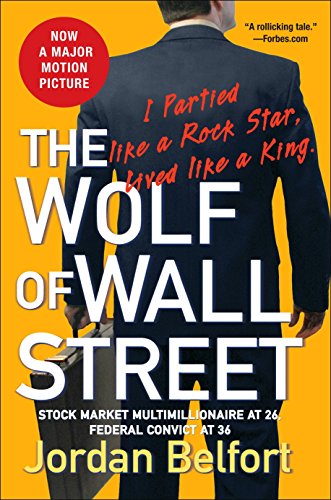 By day he made thousands of dollars a minute. By night he spent it as fast as he could, on drugs, sex, and international globe-trotting. From the binge that sank a 170-foot motor yacht, crashed a Gulfstream jet, and ran up a $700,000 hotel tab, to the wife and kids who waited for him at home, and the fast-talking, hard-partying young stockbrokers who called him king and did his bidding, here, in his own inimitable words, is the story of the ill-fated genius they called? In the 1990s Jordan Belfort, former kingpin of the notorious investment firm Stratton Oakmont, became one of the most infamous names in American finance: a brilliant, conniving stock-chopper who led his merry mob on a wild ride out of the canyons of Wall Street and into a massive office on Long Island. Now, in this astounding and hilarious tell-all autobiography, Belfort narrates a story of greed, power, and excess no one could invent. Reputedly the prototype for the film Boiler Room, Stratton Oakmont turned microcap investing into a wickedly lucrative game as Belfort?s hyped-up, coked-out brokers browbeat clients into stock buys that were guaranteed to earn obscene profits?for the house. But an insatiable appetite for debauchery, questionable tactics, and a fateful partnership with a breakout shoe designer named Steve Madden would land Belfort on both sides of the law and into a harrowing darkness all his own. From the stormy relationship Belfort shared with his model-wife as they ran a madcap household that included two young children, a full-time staff of twenty-two, a pair of bodyguards, and hidden cameras everywhere?even as the SEC and FBI zeroed in on them?to the unbridled hedonism of his office life, here is the extraordinary story of an ordinary guy who went from hustling Italian ices at sixteen to making hundreds of millions. Until it all came crashing down? From the Hardcover edition.

"A rollicking tale of [Jordan Belfort's] rise to riches as head of the infamous boiler room Stratton Oakmont . . . proof that there are indeed second acts in American lives."--Forbes "A cross between Tom Wolfe's The Bonfire of the Vanities and Scorsese's GoodFellas . . . Belfort has the Midas touch."--The Sunday Times (London) "Entertaining as pulp fiction, real as a federal indictment . . . a hell of a read."--Kirkus Reviews Book Description:

Stock market multimillionaire at 26, federal convict at 36, he partied like a rock star, lived like a king, and barely survived his rise and fall as an American entrepreneurial icon.

1. The Wolf of Wall Street

2. The Wolf of Wall Street

3. The Wolf of Wall Street

4. The Wolf of Wall Street

5. The Wolf of Wall Street

6. The Wolf of Wall Street

7. The Wolf of Wall Street

8. The Wolf of Wall Street

9. The Wolf of Wall Street

10. The Wolf of Wall Street (Paperback or Softback)