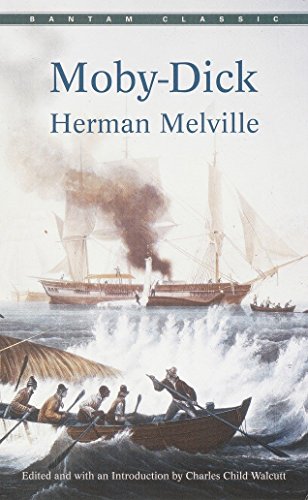 'Command the murderous chalices!...Drink ye harpooners! drink and swear, ye men that man the deathful whaleboat's bow - Death to Moby Dick!'. So Captain Ahab binds his crew to fulfil his obsession - the destruction of the great white whale. Under his lordly but maniacal command the Pequod's commercial mission is perverted to one of vengeance. To Ahab, the monster that destroyed his body is not a creature, but the symbol of 'some unknown but still reasoning thing'. Uncowed by natural disasters, ill omens, even death, Ahab urges his ship towards 'the undeliverable, nameless perils of the whale'.

Book Description Paperback. Condition: New. Reprint. Language: English. Brand new Book. Nominated as one of America's best-loved novels by PBS's The Great American Read First published in 1851, Herman Melville's masterpiece is, in Elizabeth Hardwick's words, "the greatest novel in American literature." The saga of Captain Ahab and his monomaniacal pursuit of the white whale remains a peerless adventure story but one full of mythic grandeur, poetic majesty, and symbolic power. Filtered through the consciousness of the novel's narrator, Ishmael, Moby-Dick draws us into a universe full of fascinating characters and stories, from the noble cannibal Queequeg to the natural history of whales, while reaching existential depths that excite debate and contemplation to this day. Seller Inventory # ABZ9780553213119