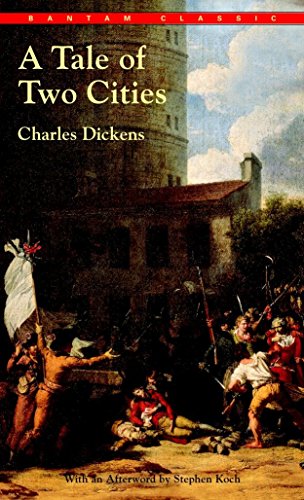 The spectre of the French Revolution--the rumbling of the death carts, thethud of the guillotine, the ferocious mobs and the storming of the Bastille--isvividly portrayed in this lavish BBC production, complete with a full cast andstirring music. Dickens' epic tale is a listening experience to betreasured.

"[A Tale of Two Cities] has the best of Dickens and the worst of Dickens: a dark, driven opening, and a celestial but melodramatic ending; a terrifyingly demonic villainess and (even by Dickens' standards) an impossibly angelic heroine. Though its version of the French Revolution is brutally simplified, its engagement with the immense moral themes of rebirth and terror, justice, and sacrifice gets right to the heart of the matter . . . For every reader in the past hundred and forty years and for hundreds to come, it is an unforgettable ride."-from the Introduction by Simon Schama

One of Dickens's most exciting books, set against the backdrop of the French revolution

5. A Tale of Two Cities (Paperback)

Book Description Paperback. Condition: New. Reissue. Language: English. Brand new Book. With his sublime parting words, "It is a far, far better thing that I do, than I have ever done." Sidney Carton joins that exhalted group of Dickensian characters who have earned a permanent place in the popular literary imagination. His dramatic story, set against the volcanic fury of the French Revolution and pervaded by the ominous rumble of the death carts trundling toward the guillotine, is the heart-stirring tale of a heroic soul in an age gone mad. A masterful pageant of idealism, love, and adventure -- in a Paris bursting with revolutionary frenzy, and a London alive with anxious anticipation -- A Tale of Two Cities is one of Dickens's most energetic and exciting works. Seller Inventory # ABZ9780553211764

6. A Tale of Two Cities (Paperback or Softback)