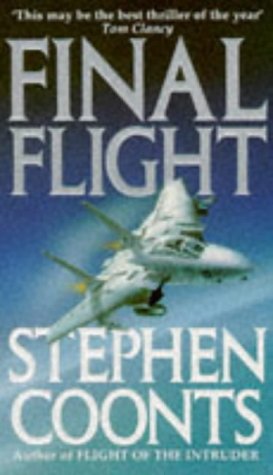 Jack Grafton, hero of "Flight of the Intruder", is the commander of an air wing on the USS United States, a supercarrier whose cargo includes six nuclear warheads. A terrorist plot to steal these warheads leads to a last confrontation in the skies above the Mediterranean.

A top-notch, edge-of-the-seat Jake Grafton thriller from the bestselling author of LIBERTY.

Stephen Coonts is a former naval aviator who flew combat missions during the Vietnam War. His previous novels have been worldwide bestsellers. A former attorney, he resides with his wife and son in Las Vegas, Nevada.

Book Description Bantam Books (Transworld Publish, 1990. Paperback. Condition: Used; Good. Dispatched, from the UK, within 48 hours of ordering. This book is in good condition but will show signs of previous ownership. Please expect some creasing to the spine and/or minor damage to the cover. Grubby book may have mild dirt or some staining, mostly on the edges of pages. Seller Inventory # CHL5633944

Book Description Bantam. Paperback. Condition: Good. A copy that has been read, but remains in clean condition. All pages are intact, and the cover is intact. The spine may show signs of wear. Pages can include limited notes and highlighting, and the copy can include previous owner inscriptions. At ThriftBooks, our motto is: Read More, Spend Less. Seller Inventory # G055317598XI3N00

Book Description Paperback. Condition: Very Good. The book has been read, but is in excellent condition. Pages are intact and not marred by notes or highlighting. The spine remains undamaged. Seller Inventory # GOR008847564

Book Description Bantam Books (Transworld Publish, 1990. Paperback. Condition: Good. All orders are dispatched the following working day from our UK warehouse. Established in 2004, we have over 500,000 books in stock. No quibble refund if not completely satisfied. Seller Inventory # mon0004015301

Book Description Bantam Books (Transworld Publishers a division of the Random House Group) 01/07/1990, 1990. Condition: Very Good. This book is in very good condition and will be shipped within 24 hours of ordering. The cover may have some limited signs of wear but the pages are clean, intact and the spine remains undamaged. This book has clearly been well maintained and looked after thus far. Money back guarantee if you are not satisfied. See all our books here, order more than 1 book and get discounted shipping. . Seller Inventory # 7719-9780553175981

Book Description Bantam Books (Transworld Publishers a division of the Random House Group) 01/07/1990, 1990. Condition: Very Good. Shipped within 24 hours from our UK warehouse. Clean, undamaged book with no damage to pages and minimal wear to the cover. Spine still tight, in very good condition. Remember if you are not happy, you are covered by our 100% money back guarantee. Seller Inventory # 6545-9780553175981