Items related to The Curse of Lono

The Curse of Lono 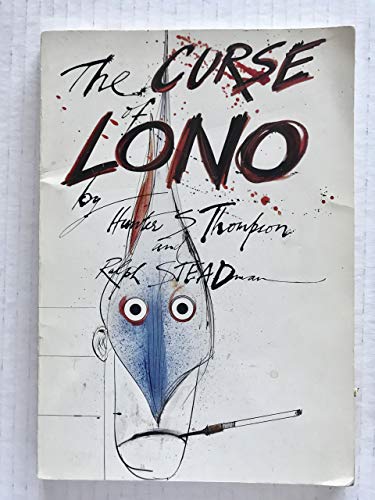 A wild ride to the dark side of Americana The Curse of Lono is to Hawaii what Fear and Loathing was to Las Vegas: the crazy tales of a journalist's ""coverage"" of a news event that ends up being a wild ride to the dark side of Americana. Originally published in 1983, Curse features all of the zany, hallucinogenic wordplay and feral artwork for which the Hunter S. Thompson/Ralph Steadman duo became known and loved. This curious book, considered an oddity among Hunter's oeuvre, was long out of print, prompting collectors to search high and low for an original copy. TASCHEN's signed, limited edition sold out before the book even hit the stores, but this unlimited version, in a different, smaller format, makes The Curse of Lono accessible to everyone.

Hunter S. Thompson's books include Screwjack, Hell's Angels, Fear and Loathing in Las Vegas, The Proud Highway, Better Than Sex, The Rum Diary, Kingdom of Fear, and Hey Rube. A contributor to various national and international publications, including a weekly sports column for ESPN.com, Thompson lives in a fortified compound near Aspen, Colorado. Ralph Steadman is best known for his collaboration with Hunter S. Thompson in the birth of "Gonzo" journalism. He is also a printmaker (his prints include a series of etchings on writers from William Shakespeare to William Burroughs). His own books include the lives of Sigmund Freud and Leonardo da Vinci and The Big I Am, the story of God. Sean Penn, acclaimed Academy Award-winning actor, director, writer, and producer, wrote the foreword for the new TASCHEN release. A close friend of Hunter S. Thompson, Sean is currently developing a film based on The Curse of Lono. Steve Crist is the photography editor for TASCHEN, where he recently produced Marilyn by Andre de Dienes, Steve McQueen by William Claxton, and The Polaroid Book. He is currently working with Hugh Hefner on Hugh Hefner's Playboy, on William Claxton's forthcoming Jazz opus Jazzlife, and a book of photographs created by Hunter S. Thompson. A California native, Steve is based at the TASCHEN America offices in Los Angeles.

1. The Curse of Lono

2. THE CURSE OF LONO

3. The Curse of Lono Hunter S. Thompson and Ralph Steadman

4. The Curse of Lono