Items related to The Stately Homo: A Celebration of the Life of Quentin...

Bailey, Paul The Stately Homo: A Celebration of the Life of Quentin Crisp

The Stately Homo: A Celebration of the Life of Quentin Crisp 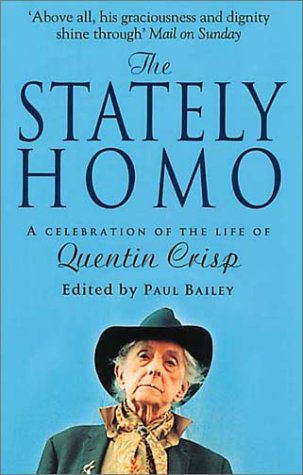 This work is a tribute to the unique character of Quentin Crisp, a flamboyant, gifted and genuine British eccentric and artist. A number of well-known contributors explore Quentin Crisp's life from a variety of angles.

'Required reading for anyone whose life was touched by Crisp in some way. Which, whether we care to admit or not probably means most of us' Time Out 'All in all...a delight. I read the accounts with delight and much regret - at having never met in person the man we seem so reluctant to forget' The Pink Paper 'His graciousness and dignity shine through' Mail on Sunday

Paul Bailey has created a fascinating portrait of the unique, and uniquely amusing, Quentin Crisp, with contributions from friends, admirers and critics. His various careers - as a performer, artist's model, writer of a memorable autobiography and authority on style and etiquette - are examined with wit, affection and disinterested criticism. Designed to explore his life from a variety of angles, The Stately Homo is a tribute to one of the twentieth century's true English eccentrics.

1. THE STATELY HOMO: A CELEBRATION

2. THE STATELY HOMO: A CELEBRATION