Items related to Notes From A Big Country: Journey Into the American...

Bryson, Bill Notes From A Big Country: Journey Into the American Dream (Bryson)

Notes From A Big Country: Journey Into the American Dream (Bryson) 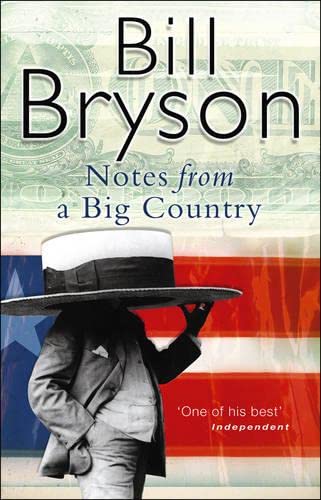 Bill Bryson has the rare knack of being out of his depth wherever he goes - even (perhaps especially) in the land of his birth. This became all too apparent when, after nearly two decades in England, the world's best-loved travel writer upped sticks with Mrs Bryson, little Jimmy et al. and returned to live in the country he had left as a youth.

Of course there were things Bryson missed about Blighty but any sense of loss was countered by the joy of rediscovering some of the forgotten treasures of his childhood: the glories of a New England autumn; the pleasingly comical sight of oneself in shorts; and motel rooms where you can generally count on being awakened in the night by a piercing shriek and the sound of a female voice pleading, 'Put the gun down, Vinnie, I'll do anything you say.'

Whether discussing the strange appeal of breakfast pizza or the jaw-slackening direness of American TV, Bill Bryson brings his inimitable brand of bemused wit to bear on that strangest of phenomena - the American way of life.

Here's a fact for you. According to the latest "Abstract of the UnitedStates", every year more than 400,00 Americans suffer injuries involving beds,mattresses or pillows...That is more people than live in greater Coventry. That is almost 2,000 bed, mattress orpillow injuries a day. In the time it takes you to read this article, four Americans will somehow manage tobe wounded by their bedding.

Fans of Bill Bryson will know by now that this isthe kind of completely useless information that gets him excited. In fact, you are unlikely to read anyone else who derivesquite so much pleasure from meaningless statistics. If those statistics are about the USA (Bryson's homeland) or his adoptedEngland--or even better, comparing one to the other--then he is in heaven. And it is not only the uselessness of theinformation that interests him, but also the fact that Americans spend millions of dollars and hours each yearcollecting such data together.

Though not a match for his earlier success of Notesfrom a Small Island, Notes from a Big Country takes a good second place. It collects together more than 18 monthsworth of Mail on Sunday columns which Bryson wrote between October 1996 and May 1998 after he and his English wife andchildren returned to the US and settled in New England. The only thing that outshines his amazement--and sometimes,outright dismay--at the way American society has changed while he's been away, is his English-born family's instantembracing of transatlantic culture.

A word of warning: reading Bill Bryson is not aspectator sport...you are invited-- in fact, compelled--to marvel at how the nation that "has the largest economy, the mostcomfortably off people, the best research facilities, many of the finest universities and think-tanks, and more NobelPrize winners than the rest of the world put together" could be the same nation where "13 per cent of women cannot say whether they wear their tights under their knickers or over them. That's something like 12 million women walkingaround in a state of chronic foundation garment uncertainty." This is Bryson at his best, and though not every column inchhits the heady heights of underwear distribution, there are enough laugh-out-loud moments to keep you satisfied.

Detractors of Bryson's work complain all his booksare the same, yet dedicated followers cite that very uniformity of style and subject as the reason they return, book after book. Anyone disappointed by A Walk in the Woods (Bryson's account of hiking the Appalachian Trail and not his best book) will have their faith restored by Notes from a Big Country--here Bryson returns to his favourite subject and the simple, journalistic prose that makes his wacky facts and observations instantly accessible.

Bryson does not pretend to deliver an intellectual treatise on the state of mankind; instead he offers one man's take on how humanity lurches from one day to another--ironically through the kinds of details he mocks others for collecting--Lucie Naylor

"One of his best books" (Scott Bradfield Independent)

"Delightful bite-size essays that exude affection while debunking the ridiculous with wonderful succinctness... This is not a book to be read in a single sitting. It is one to be savoured" (Martin Fletcher The Times)

"Bryson is great when explaining the idiosyncracies of America to middle England and making it funny... He is both serious and contemtuously funny" (Guardian)

1. Notes From a Big Country

Book Description 2011. Paperback. Condition: New. Dispatched, from the UK, within 48 hours of ordering. This book is in Brand New condition. Aged book. Tanned pages and age spots, however, this will not interfere with reading. Seller Inventory # CHL5718614

2. Notes from a Big Country

3. Notes from a Big Country

4. NOTES FROM A BIG COUNTRY