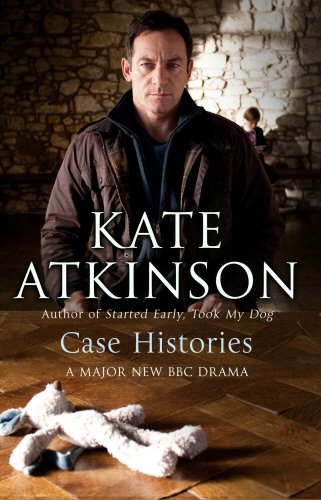 Case Histories is Kate Atkinson's first foray into crime fiction, and introduces the popular Jackson Brodie, who returns in One Good Turn, When Will There Be Good News? and Started Early, Took My Dog. A six-part BBC1 drama series starring Jason Isaacs as Jackson Brodie and set in Edinburgh is scheduled for transmission in autumn 2011.

A sweltering, unusually hot summer. To Jackson Brodie, former police inspector turned private investigator, the world consists of one accounting sheet - Lost on the left, Found on the right - and the two never seem to balance. Surrounded by death, intrigue and misfortune, his own life haunted by a family tragedy, Jackson attempts to unravel three disparate case histories and begins to realise that in spite of apparent diversity, everything is connected...

"Her best book yet, an astonishingly complex and moving literary detective story that made me sob but also snort with laughter. It's the sort of novel you have to start rereading the minute you've finished it" (Guardian)

"Sharp humour, together with a number of unexpected twists makes this a typically pacey and intelligent read" (Daily Mail)

"A greedy feast of a story by a masterful author...A profound, exciting and lingering read" (Daily Express)

"To read it is to enter a hall of mirrors...Part complex family drama, part mystery, it winds up having more depth and vividness than ordinary thrillers and more thrills than ordinary fiction...A wonderfully tricky book" (New York Times)

Book Description Black Swan, 2011. Paperback. Condition: Used; Good. **Simply Brit** Shipped with Premium postal service within 24 hours from the UK with impressive delivery time. We have dispatched from our book depository; items of good condition to over ten million satisfied customers worldwide. We are committed to providing you with reliable and efficient service at all times. Seller Inventory # mon0001594639

Book Description Black Swan, 2011. Paperback. Condition: Used; Good. **SHIPPED FROM UK** We believe you will be completely satisfied with our quick and reliable service. All orders are dispatched as swiftly as possible! Buy with confidence!. Seller Inventory # mon0001970896

Book Description Black Swan 09/06/2011, 2011. Condition: Good. Will be shipped promptly from UK warehouse. Book is in good condition with no missing pages, no damage or soiling and tight spine. There may be some dog-eared pages showing previous use but overall a great book. Seller Inventory # 9053-9780552777551

Book Description Transworld Publishers, 2011. Paperback. Condition: GOOD. Spine creases, wear to binding and pages from reading. May contain limited notes, underlining or highlighting that does affect the text. Possible ex library copy, will have the markings and stickers associated from the library. Accessories such as CD, codes, toys, may not be included. Seller Inventory # 3289662286

Book Description Transworld Publishers, 2011. Paperback. Condition: Very Good. The book has been read, but is in excellent condition. Pages are intact and not marred by notes or highlighting. The spine remains undamaged. Seller Inventory # GOR002902399

Book Description Transworld Publishers, 2011. Paperback. Condition: Fair. A readable copy of the book which may include some defects such as highlighting and notes. Cover and pages may be creased and show discolouration. Seller Inventory # GOR003695259

Book Description Black Swan 09/06/2011, 2011. Condition: Very Good. This book is in very good condition and will be shipped within 24 hours of ordering. The cover may have some limited signs of wear but the pages are clean, intact and the spine remains undamaged. This book has clearly been well maintained and looked after thus far. Money back guarantee if you are not satisfied. See all our books here, order more than 1 book and get discounted shipping. . Seller Inventory # 7719-9780552777551