Items related to Small Firms in the Japanese Economy

Small Firms in the Japanese Economy 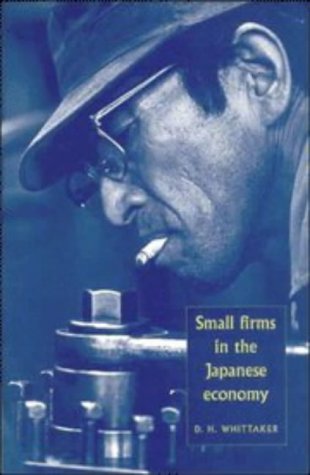 Now in paperback, this book considers the role of small firms in the Japanese economy and challenges established views of the Japanese economy, society and political economy. Japan's giant corporations are household names, and dominate our views of the Japanese economy. But surprisingly, Japan also ranks alongside Italy as having the highest proportion of small firms - and employment in them - amongst the OECD countries. These small firms have either been ignored, or they have been treated as appendages of large firms. This book paints a balanced picture based on a unique and statistically rich survey. It looks at small firms in Japan's leading machine industries, their relations with each other as well as with large firms, and their internal management, employment and technology dynamics. Paradoxically, in contrast to the 'resurgence' of small firms in other industrialised countries, their number and employment share in Japan are now in decline.

' ... this book has a lot of material of interest to specialists in applied microeconomics, small business economics, entrepreneurship, and business history ... the central chapters of the book ... report on a unique body of primary source evidence in a revealing way. The book deserves to be read widely, not the least because it is a useful corrective to rather ill-informed stylisations about the structure of the Japanese economy'. The Economic Journal

'... a thought-provoking piece. It is meticulously written and contains extremely rich empirical data. It raises many controversial issues which will no doubt stimulate further research on the subject in the years to come.' Industrial Relations Journal

' ... this well-researched and thorough account. An excellent bibliography ... '. Asian Affairs

Now in paperback this book documents the role of small firms in Japan's economy. It studies their relations with each other as well as with large firms. While providing a unique and statistically rich survey, it challenges established views of the Japanese economy and society.

1. Small Firms in the Japanese Economy