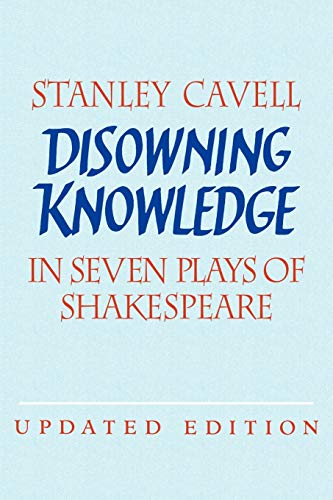 'These beautiful essays on Shakespeare, lucid, complicated, and deeply moving, are unique ... for the conversation they forge between philosophy and literature. Unified by the twin themes of knowledge and acknowledgment, and thus by the relationship between scientific understanding and human understanding, the volume brings together some of the most remarkable literary essays in modern scholarship. Tp his now famous readings of six plays of Shakespeare, Cavell now adds a stunning ... piece on Macbeth, containing complicated meditations about gender, sexuality and humanity.' Martha Nussbaum, author of Upheavals of Thought

'Disowning Knowledge makes wonderfully clear why Stanley Cavell's career-long struggle with the philosophical problem of skepticism converges so forcefully with his preoccupation with Shakespearean theater. Admirers of Cavell's remarkable 1969 essay on King Lear and of his published readings of Othello and Coriolanus will be delighted to find them together in one volume and complemented by equally challenging commentaries on Antony and Cleopatra, Hamlet and The Winter's Tale. Shakespeareans who do not already know Cavell's previous work should prepare themselves for a demanding encounter with the most distinctive and powerful voice in contemporary Shakespeare criticism.' Professor Richard P. Wheeler, University of Illinois at Urbana-Champaign

'Stanley Cavell's essays on Shakespeare - deep, intellectually tenacious, and humane meditations on the nature of artistic genius - are thrilling and essential reading. They illuminate the relation between skepticism and theater, transform the language of literary criticism, and heighten the ethical significance of aesthetic response.' Professor Stephen Greenblatt, Harvard University

Reissued with a new essay on Macbeth this famous collection of essays on Shakespeare's tragedies considers these plays as responses to the crisis of knowledge and the emergence of modern skepticism provoked by the new science of the late sixteenth and early seventeenth centuries.

4. Disowning Knowledge: In Seven Plays of Shakespeare (Paperback or Softback)