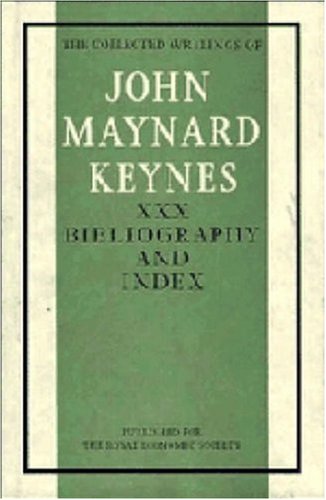 This volume marks the completion of the Collected Writings. The general index to the edition is designed to allow those interested in the development of Keynes's thought, and those interested in the history of economic thought more generally, to trace the development of his ideas throughout his career. The bibliography to the edition records all the writings of Keynes published not only in English but also in translation. It provides an indication of the process by which Keynes's writings were disseminated throughout the world. In addition, this volume includes an editorial introduction describing the principles of selection used by the editors, as well as a few items that escaped them in the preparation of earlier volumes. This volume is an essential tool for the effective use of the material in the twenty-nine other volumes of this edition.

'...among the glories of modern publishing...edited with exemplary authority and lack of fuss...' - London Review of Books

Book Description Condition: Good. Former Library book. Shows some signs of wear, and may have some markings on the inside. Seller Inventory # 615471-6