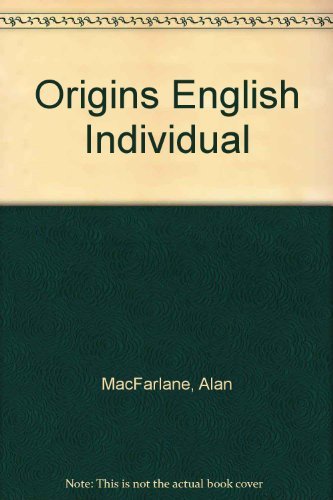 The Origins of English Individualism is about the nature of English society during the five centuries leading up to the Industrial Revolution, and the crucial differences between England and other European nations. Drawing upon detailed studies of English parishes and a growing number of other intensive local studies, as well as diaries, legal treatises and contemporary foreign sources, the author examines the framework of change in England. He suggests that there has been a basic misrepresentation of English history and that this has considerable implications both for our understanding of modern British and American society, and for current theories concerning the preconditions of industrialization.

"Historians are said to be moving back towards the idea of an enduring national identity. Alan Macfarlane wrote a paradigm–busting book back in the late 1970s, The Origins of English Individualism. That must have taken courage considering the sort of a decade it was ... A brilliant analysis."
The Independent

Alan Macfarlane is Reader in Social Anthropology at the University of Cambridge, and Fellow of King′s College.