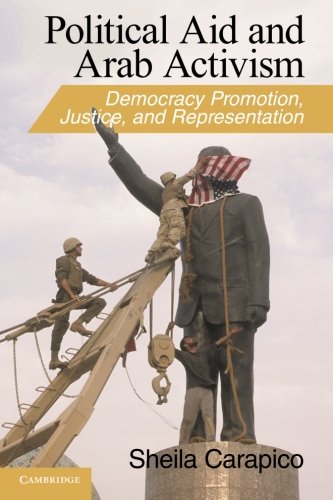 What does it mean to promote 'transitions to democracy' in the Middle East? How have North American, European and multilateral projects advanced human rights, authoritarian retrenchment or Western domination? This book examines transnational programs in Egypt, Jordan, Morocco, Yemen, Lebanon, Tunisia, Algeria, the exceptional cases of Palestine and Iraq, and the Arab region at large during two tumultuous decades. To understand the controversial and contradictory effects of political aid, Sheila Carapico analyzes discursive and professional practices in four key subfields: the rule of law, electoral design and monitoring, women's political empowerment and civil society. From the institutional arrangements for extraordinary undertakings such as Saddam Hussein's trial or Palestinian elections to routine templates for national women's machineries or NGO networks, her research explores the paradoxes and jurisdictional disputes confronted by Arab activists for justice, representation and 'non-governmental' agency.

'Does political aid further transitions to democracy in practice? Carapico addresses this question for nine Middle East and North Africa (MENA) polities with projects as the unit of analysis ... Carapico concludes that democracy promotion is not only 'inherently political', but also 'deeply paradoxical'. Summing up: recommended.' R. G. Mainuddin, Choice

'[This book] provides a refreshing perspective on the promotion of democracy and on politics of the Middle East. It analyzes the role of North American, European, and other transnational agencies in promoting human rights and democratization in the Middle East over the last two decades. ...Political Aid and Arab Activism ranks as one of the most important works published on the involvement of Western and other transnational agencies in Arab transitions from authoritarianism.' Wanda Krause, Academic Council on the United Nations System (www.acuns.org)