Items related to Mapping the Mind 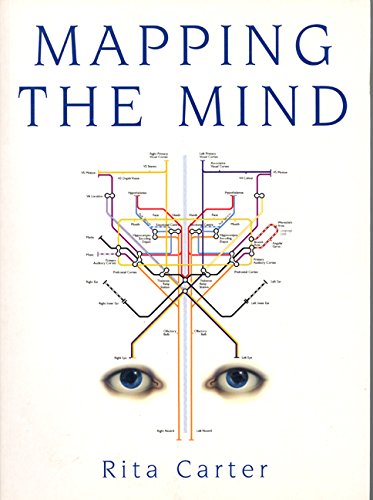 Today a brain scan reveals our thoughts, moods, and memories as clearly as an X-ray reveals our bones. We can actually observe a person's brain registering a joke or experiencing a painful memory. Drawing on the latest imaging technology and the expertise of distinguished scientists, Rita Carter explores the geography of the human brain. Her writing is clear, accessible, witty, and the book's 150 illustrations - most in color - present an illustrated guide to that wondrous, coconut-sized, wrinkled gray mass we carry inside our heads. "Mapping the Mind" charts the way human behavior and culture have been molded by the landscape of the brain. Carter shows how our personalities reflect the biological mechanisms underlying thought and emotion and how behavioral eccentricities may be traced to abnormalities in an individual brain.Obsessions and compulsions seem to be caused by a stuck neural switch in a region that monitors the environment for danger. Addictions stem from dysfunction in the brain's reward system. Even the sense of religious experience has been linked to activity in a certain brain region. The differences between men and women's brains, the question of a "gay brain," and conditions such as dyslexia, autism, and mania are also explored. Looking inside the brain, writes Carter, we see that actions follow from our perceptions, which are due to brain activity dictated by a neuronal structure formed from the interplay between our genes and the environment. Without sidestepping the question of free will, Carter suggests that future generations will use our increasing knowledge of the brain to "enhance those mental qualities that give sweetness and meaning to our lives, and to eradicate those that are destructive."

The brain has been the last "terra incognita" of the body for medical exploration, largely because its matter is so different from that of the rest of the body. In 1986 the eminent evolutionary biologist John Maynard Smith identified the problem of how the brain works as one of the two outstanding problems in biology (along with how a simple egg develops into a complex adult organism). Most of us have experienced some apparently inexplicable quirk of the mind, such as selective memory loss. Without obvious "hard wiring", anatomical "labels" or other guiding features, medical scientists have struggled to identify its parts, their functions and connections to the mind. Not that this has stopped curiosity; there is anthropological evidence dating back some thousands of years for crude but sometimes successful attempts to open the skull and get at the brain.

Rita Carter is an award-winning medical writer. (Medical Journalists' Association prize for outstanding contribution). In Mapping the Mind she explores the landscape of the brain and its connections with the mind. We should all be enthralled by this adventure for "it is giving us greater understanding about one of the oldest and most fundamental of mysteries--the relationship between the brain and mind". Carter introduces the subject with the historical background of anatomical discoveries and emerging theories of brain/mind connections. The famous tragic story of the 19th-century American railway worker, Phineas Gage, is here. An iron rod blasted through poor Phineas's skull. It entered below his left eye and exited through his skull roof, removing a large chunk of his forebrain. Amazingly, Phineas survived but his personality was radically changed, as was reported by his doctor, John Harlow.

In this fascinating and well-illustrated book, Rita Carter shows just how far we have travelled in our understanding since the mid-19th century world of Dr Harlow and gives a sense of how far we still have to travel. As she says: "The world within our heads is more marvellous than anything we can dream up". The last few decades have seen a revolution in non-invasive brain mapping thanks to the scientific miracles of Magnetic Resonance Imaging and associated technologies. It is now possible to see which part of the brain responds to specific stimulation in real time. As Rita Carter says: "The challenge of mapping this world...is currently engaging some of the finest scientists in the world". Excellent design and imagery, plus vignettes from famous scientists such as Francis Crick, a bibliography and an index make this a very useful book as well as a good read. --Douglas Palmer

It's fascinating to understand how much of our personality is directly related to brain function. (Daniel Johns, University Bookseller WESTERN MORNING NEWS)

Well researched...this is a good read for the specialist or general scientist, or anyone inetrested in things of or about the mind. (SCHOOL SCIENCE REVIEW)