Items related to Disenchanted Night: The Industrialization of Light...

Schivelbusch, W Disenchanted Night: The Industrialization of Light in the Nineteenth Century

Disenchanted Night: The Industrialization of Light in the Nineteenth Century 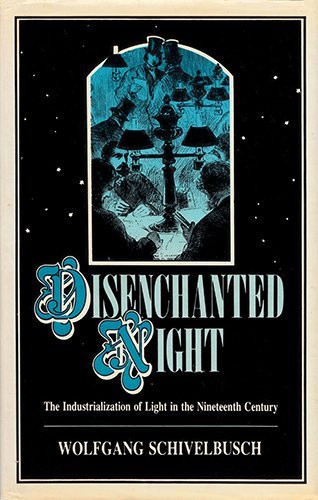 Examines the interplay between new and revolutionary technology and nineteenth-century imagination.

"The newer the culture is," writes the German journalist and historian Wolfgang Schivelbusch, "the more it fears nightfall." Enigmatic though that statement may be, it speaks to a truth of the newly industrialised nations of nineteenth-century North America and Europe. With their populations increasingly crowded into cities and the mood of those city dwellers increasingly revolutionary, those nations had good reason to illuminate the darkness. Schivelbusch extends the story of industrial light well beyond Thomas Edison, with whom so many other histories begin; he writes of pioneering contraptions such as the thermolamp, of the early uses of arc lighting in warfare and entertainment alike, of the relationship between the development of railways and the gaslight. Schivelbusch has a keen eye for the telling detail, as when he relates the reaction of Parisians to the strange fire that, in 1844, bathed the Place de la Concorde: "The light, which flooded a large area, was so strong that ladies opened up their umbrellas--not as a tribute to the inventors, but in order to protect themselves from the rays of this mysterious new sun." Schivelbusch goes on to discuss, among other things, the development of "nightlife," for, whereas in earlier centuries dwellers of many cities were locked into their homes at night for the ostensible safety of the public at large, now they were free to walk well-illuminated streets at all hours. A lively work of social and technological history, Disenchanted Night looks deeply into matters that we have come to take for granted, but that once seemed like magic. --Gregory McNamee, Amazon.com

"A readable, highly personal, often original, and deliberately provocative attempt to integrate the story of artifical light with the history of modern life."--Neil Harris, "Science

1. Disenchanted Night: The Industrialization of Light in the Nineteenth Century Schivelbusch, Wolfgang and Davies, Angela

2. Disenchanted Night: The Industrialization of Light in the Nineteenth Century