Items related to As I See it

As I See it 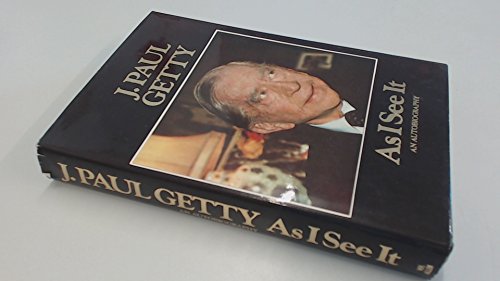 While writing his autobiography, Jean Paul Getty - then perhaps the world's richest man - hoped it would be the final verdict on himself, on his many friends and associates, and on his times. Regrettably, it proved to be so: Getty died in 1976 as "As I See It" was going to press. Now reissued with a number of new illustrations, this autobiography introduces the famed tycoon to a new generation of readers. Known largely for his fabled wealth, J. Paul Getty was highly educated, competent in six languages, a world traveller, and a committed collector of art. Getty describes how he amassed his staggering fortune, discusses the prospects of democracy, lists the seven key points success-oriented men should know about women, and recounts undergraduate conversations at Oxford with his good friend "David", the future King Edward of England. The cast of characters who populate his intimate anecdotes reads like a "Who's Who" of the 20th century: Winston Churchill, Clara Bow, Nelson Rockefeller, Bernard Berenson, Bela Lugosi, Jacqueline Onassis, Richard Nixon, Franklin D. Roosevelt, Charlie Chaplin, and hundreds more. He discusses with frankness his several marriages and liaisons and speaks about his notorious stinginess and the often-bizarre problems confronted by the impossibly wealthy.

1. As I see it: The autobiography of J. Paul Getty