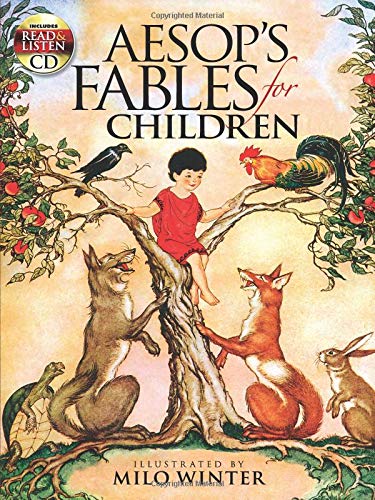 Every child should know the stories of "The Hare and the Tortoise," "Belling the Cat," "The Ants and the Grasshopper," and Aesop's other timeless tales. This splendid gift edition features more than 130 of his beloved fables, enhanced with full-color illustrations and a wonderful CD recording ― by a diverse cast of professional readers ― of 42 of the most popular stories.

Huge, extravagantly designed and detailed pop-up illustrations for 10 classic cautionary tales showcase a trio of uncommon talents. Beatrice and Whatley collaborate seamlessly on the visuals, producing in traditional outdoor or rural settings a cast of realistic but broadly expressive animal figures. Many of these, particularly the wonderfully snarky-looking goose laying gold-foil eggs and the frantic, massive lion that lunges up at viewers through an entangling net as his spread opens, will elicit involuntary 'Whoas' of startled admiration. The fables, one per opening except for a miraculously un-crowded quintet gathered on the central spread, are paired to large central tableaux and smaller but only slightly less complex pop-ups in corner booklets. All are pithy versions of the usual Aesopian suspects written in a fluid, contemporary style ('You do indeed have a beautiful voice,' the fox assures the cheeseless crow, 'but you don't seem to have a brain!') with some morals embedded and others laid out explicitly. Veteran paper engineer that he is, Moerbeek concocts ingeniously multilayered, interwoven constructions that are vulnerable to grabby little hands but, with careful supervision, sturdy enough to survive multiple shared readings. Timeless wisdom, splendidly decked out. --Kirkus Reviews

This book makes good use of the format to showcase 10 traditional tales. Five of the fables are presented on handsomely illustrated spreads, each including a dramatic 3-D sculpture that takes center stage and two smaller foldouts embellished with movable parts that contain the bulk of the text. Whether it's a smug-looking goose spreading her wings and lording it over a golden egg, a crow perched atop a tree clasping a piece of cheese in her beak while a hungry fox looks greedily on from below, or a rope-tangled lion that seems to bound right off the page, each centerpiece pop-up does an excellent job of grabbing readers' attention and drawing them into the story. In each case, a foldout or pull-tab animal cleverly incorporated into the scene can be manipulated to reveal the tale's moral. Five more fables, including 'The Wind and the Sun,' 'The Dog and His Bone,' and 'Two Travelers and a Bear,' are presented in a single spread via mini booklets. Throughout, rich earthy hues, lush forest landscapes, and vivid detail make the illustrations appealing. The straightforward text aptly conveys the gist of each tale, and a brief section offers background about Aesop. Share this book aloud to introduce these well-known fables but be prepared to hand it over to children eager to explore the delightfully detailed and fairly sturdy pop-up pages on their own. --SLJ, September 2011

"Aesop (also spelled Æsop, from the Greek A???o?—Ais?pos), known only for the genre of fables ascribed to him, was by tradition a slave (?o??o?) who was a contemporary of Croesus and Peisistratus in the mid-sixth century BC in ancient Greece. The various collections that go under the rubric "Aesop's Fables" are still taught as moral lessons and used as subjects for various entertainments, especially children's plays and cartoons. Most of what are known as Aesopic fables is a compilation of tales from various sources, many of which originated with authors who lived long before Aesop. Aesop himself is said to have composed many fables, which were passed down by oral tradition. Socrates was thought to have spent his time turning Aesop's fables into verse while he was in prison. Demetrius Phalereus, another Greek philosopher, made the first collection of these fables around 300 BC. This was later translated into Latin by Phaedrus, a slave himself, around 25 BC. The fables from these two collections were soon brought together and were eventually retranslated into Greek by Babrius around A.D. 230. Many additional fables were included, and the collection was in turn translated to Arabic and Hebrew, further enriched by additional fables from these cultures." (Quote from wikipedia.org)